Amazon Prime Day 2021 may be a sour one for the ecommerce giant as German trade union Verdi calls for several days of worker strikes.

The Verdi union’s three-day strike is aimed to coincide with one of Amazon’s biggest events of the year, throwing a spanner into the services Amazon can provide in its second biggest market outside the US, Reuters reported.

The Amazon Prime Day union action is part of an ongoing battle between the Seattle-based tech giant and Verdi.

“The workers in the mail order centres have to cope with the rush of customers and don’t get a cent more for the additionally intensified workload,” said Verdi representative Orhan Akman in a statement.

Amazon shot back, arguing that it offers workers fantastic pay packages and benefits, adding that 90% of employees had rejected joining previous strikes.

Earlier in June, Amazon announced that the German fulfilment centres’ entry-level wage would jump to €12 ($14.25) an hour from July, which will rise to at least €12.50 euros per hour from autumn of 2022.

Verdi previously called for a strike in March in attempt to make Jeff Bezos’ business recognise its collective bargaining agreements.

Amazon Prime Day is an initiative created by the ecommerce goliath to boost summer sales. However, it is also a prime opportunity for cybercriminals, digital defence experts Kaspersky warns.

In new research, Kaspersky warns that online stores continues to be the main bait for phishers, representing 15.77% of the baits. Global internet portals represented 15.5% of the baits, followed by banks at 10.04%.

Amazon Prime Day is also a key date for so-called brushing schemes where a seller on Amazon, for instance, can boost their rating by posting fake reviews of their product.

“The seller then sets up a series of fake accounts,” says David Emm, principal security researcher at Kaspersky. “They also create a list of names, addresses and phone numbers of real people – these could be from a leak of data resulting from a hacked provider, from the electoral roll, from the phone directory, etc.

“The seller orders (their own) goods from the fake accounts they have set up and then ships the goods to people from their address list. Finally, they write product reviews from their fake accounts (i.e. the accounts used to pay for the goods) in an effort to boost their ratings.”

The ongoing dispute between Verdi and Amazon is by no means the only thorn in Bezos’ side when it comes to his employees.

Earlier this year, the company fought back against attempts of forming the first US-based Amazon warehouse workers union. However, the ecommerce golem’s union bashing antics – which involved a massive text messaging campaign, allegedly fake employee Twitter accounts and a mailbox for unionisation votes believed to be controlled by Amazon – has since landed it in legal hot waters. The case has been heard by the National Labor Relations Board.

Amazon has also consistently faced allegations of mistreating its employees and enforcing on them such frantic schedules that they’d been reduced to urinating in plastic bottles and defecating in plastic bags. The ecommerce giant has denied these accusations, despite leaked internal documents that backed the claims.

In the US, Amazon has been hard at work trying to turn around the public perception of it as an unfair slave driver. These efforts have not been helped by the fact that its own worker wellness pamphlets stated that working in a fulfilment centre for an hour burned about as much as one hour of rowing – essentially putting it on par with being a galley slave.

Other initiatives deemed tone-deaf by the Twitterati and industry experts include introducing an AmaZen wellbeing box where employees can watch guided meditation videos. Amazon seemingly recognised its mistake with the ZenBooth after posting a video of it on Twitter. After detractors referred to the initiative as “cry closets” and “scream boxes”, the company quickly removed the video. 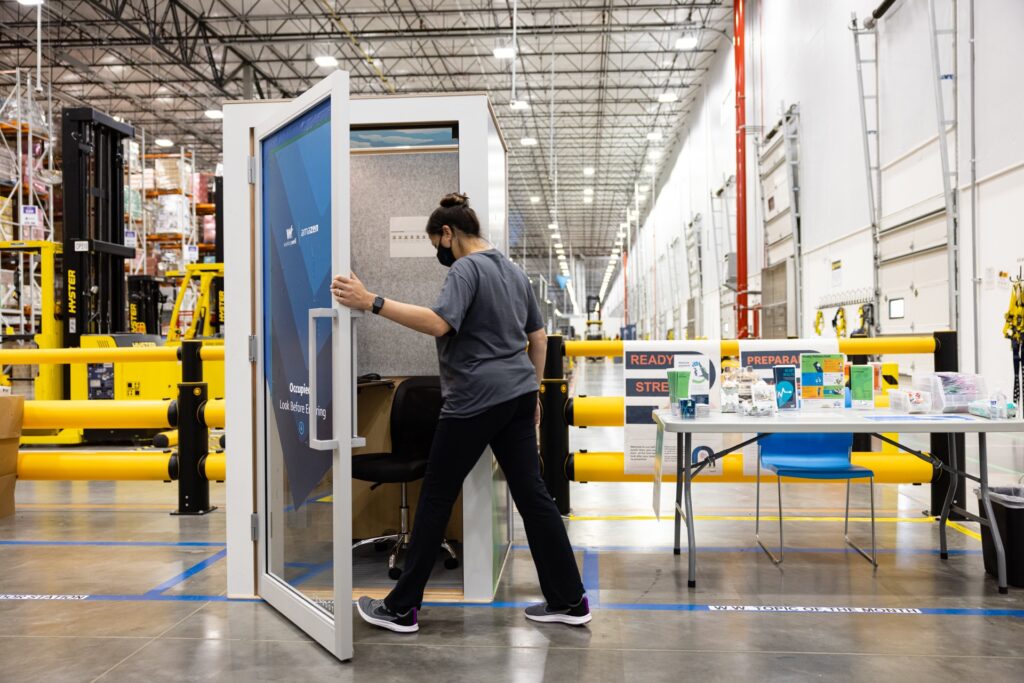 In addition, it was revealed last week that Amazon’s staff turnover rate was so high last year that executives feared they’d run out of new people to hire, according to an investigation by the New York Times.

The ecommerce behemoth hired more than 350,000 people to work in its warehouses between July to October last year, but many of these lasted “just days or weeks”, the report found.

During the height of the pandemic, the company lost “about 3% of its hourly associates each week”, translating to an annual employee turnover of roughly 150% per year. For comparison, most businesses have an employee turnover rate between 12% and 20%, while anything below 10% is considered good.