Despite being the fourth-largest economy in Europe in terms of nominal GDP, Italians have remained slow adopters of electronic payments, primarily due to a strong inclination towards cash transactions. Cash accounts for 81% of payment transaction volume.

The country has a comparatively low penetration of payment cards, although it has a robust POS terminal network. The government’s push for electronic payments through a cap on cash transactions and the implementation of interchange fee regulation resulted in a gradual increase in payment card transaction volume during the review period. Debit cards are the most used payment card at the POS, followed by charge cards. Italian consumers favor charge cards over credit cards due to their debt-averse nature.

High banking penetration and the combined efforts of banks and government bodies to promote electronic payments have helped drive debit card adoption. The gradual migration of low-value cash payments to debit cards and the rising adoption of contactless technology in debit cards has led to increased use of debit cards at POS terminals. In addition to local residents, the government is focusing on bringing the immigrant population into the formal banking system, which will further push debit card adoption in the country.

Pay-later cards yet to gain traction 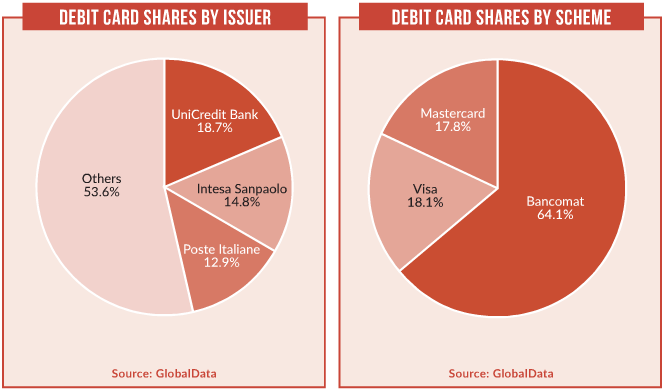 The Italian e-commerce market is one of the fastest-growing in Western Europe. In terms of transaction value, e-commerce registered annual growth of 18% to reach €23.6bn ($24.8bn) in 2017. The Italian e-commerce market is dominated by PayPal, primarily due to its security features. Other key drivers for its use are comfort, convenience, and it being the cheapest option. Debit and credit cards together accounted for almost a quarter of online spending in 2017. Bank transfers are third, mainly because most Italian sites offer this as the only payment option.

Italy has one of the largest prepaid card markets in Europe, with 27.2 million open-loop prepaid cards in circulation in 2017 and a review-period CAGR of 5.9%.

A number of factors explain the popularity of prepaid cards in Italy. Consumers’ desire to control their expenditure, their debt-averse nature, and their conservative spending attitudes are all important factors. The anonymity of prepaid cards and the bank-less transactions they offer also play a role.

There are a range of prepaid card variants generally issued on the Visa or Mastercard network, such as gift, travel, youth, and remittance cards.

BancoPosta offers a prepaid Postepay kit, which consists of two Visa cards: one for sending money and the other for receiving money. Both can be used to make cash withdrawals. This card allows the holder to pay bills, top-up other Postepay cards, and check balances and transaction history. 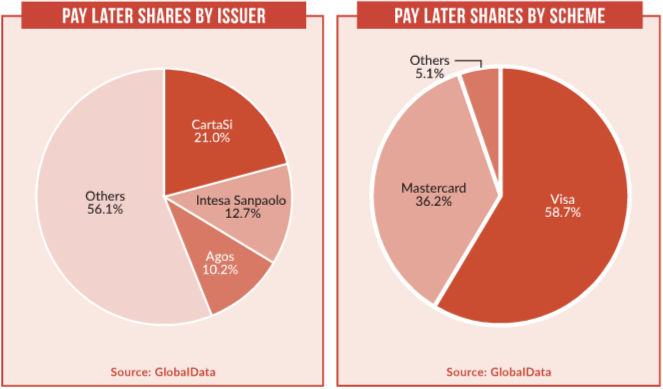 The level of development of Italy’s POS infrastructure is surprising given that debit and pay-later card usage is generally quite low in the region, but as of June 2014 it is a legal requirement in Italy for merchants to own chip and PIN card machines and offer them as an option for all transactions over €30 in value, in order to reduce tax evasion through cash transactions.

Mobile POS (mPOS) terminals are gradually gaining traction among retailers in Italy. iZettle, Ingenico, Verifone, Payleven, and Swish all have a presence in the country. According to Ingenico, as of March 2015, 45,000 merchants had adopted its mPOS solution, accounting for 1 million transactions.

In February 2016, Verifone launched the Verifone e265 mPOS terminal, which is compatible with any smartphone. As of December 2015, Mercury Payment Services had installed over 53,000 mPOS terminals in Italy.