Gift cards: will they save the high street?
Patrick Brusnahan

Two trend predictions are common in the UK market: the fall of the high street and the rise of mobile payments. However, the gift card looks as if it could buck – or at least delay – both of these. Can gift cards save the humble high street? Patrick Brusnahan reports

The UK high street is undergoing a period of massive turmoil. According to the Property Industry Alliance, there are more than £200bn ($264bn) of high street properties and supermarkets across the UK.

However, the CBRE, Britain’s largest valuer, has stated that between June and November 2018 there was a 10% drop in the capital values of good-quality high street shops. This is a massive fall.

Approximately 85,000 jobs were lost from the UK’s high streets in the first nine months of 2018, according to a report from the Office for National Statistics. Big retail businesses, such as House of Fraser, Poundworld and Toys ‘R’ Us have gone into administration over the last two years. Further companies, such as New Look and Homebase, have closed multiple stores.

An unlikely saviour for the high street is the gift card. According to First Data, the payment-processing business acquired by Fiserv for $22bn, the physical gift card is still performing strongly in the UK.

Speaking to CI, Dom Morea, head of gift solutions at First Data, says: “Digital gift cards are certainly on the rise in the UK, but it is hard to imagine physical gift cards going away anytime soon.

“In fact, per First Data’s 2018 UK Consumer Insights Study, when purchasing a gift card as a gift, UK-based consumers tend to prefer purchasing physical cards to digital by a 62% to 18% margin. According to the study, this is primarily because physical cards can offer an added personal touch during gift giving – gift receivers also prefer physical cards.

“This has outpaced growth on the digital side, where consumers have shifted from purchasing 6.1 digital gift cards in 2017 to 6.3 in 2018. The data clearly illustrates that both are growing – and, more importantly, not cannibalising one another. However, physical gift card spending growth seems to be outpacing digital gift card growth for now.”

In the survey, 34% of those surveyed said gift cards prompted a visit to a store they would not have visited. Furthermore, 44% said it prompted more frequent visits to the store.

Another crucial aspect is how much consumers spend when a gift card is involved. Morea explains: “Consumers are indeed prone to overspending the value of their gift cards – 74% of UK consumers did so in 2018, per the UK Consumer Insights study. This is a major plus for brands, and it is not too surprising.

“Just as getting customers in the door can be half the battle for retailers, for many shoppers, a significant hurdle is feeling empowered to spend at all. Once consumers have an incentive, such as a gift card, to go spend a little, they often feel comfortable enough to splurge beyond their initial budget.”

The average UK consumer spends £204 a year on gift cards; however, the majority of this seems to be as gifts for others, and the UK is not yet into self-gifting.

“Self-gifting seems to be a rising trend globally, but it was not as popular in the UK,” Morea adds. “Of the UK consumers who purchased a gift card for themselves, many did so to earn loyalty rewards or discounts.

“One popular strategy that brands have executed to drive loyalty is to offer customers an additional free or discounted card when a gift card is purchased. In the US, the self-gifting trend has become the norm: our study found that 64% of US consumers bought a gift card for their own personal use in 2018, up from 58% in 2017.” 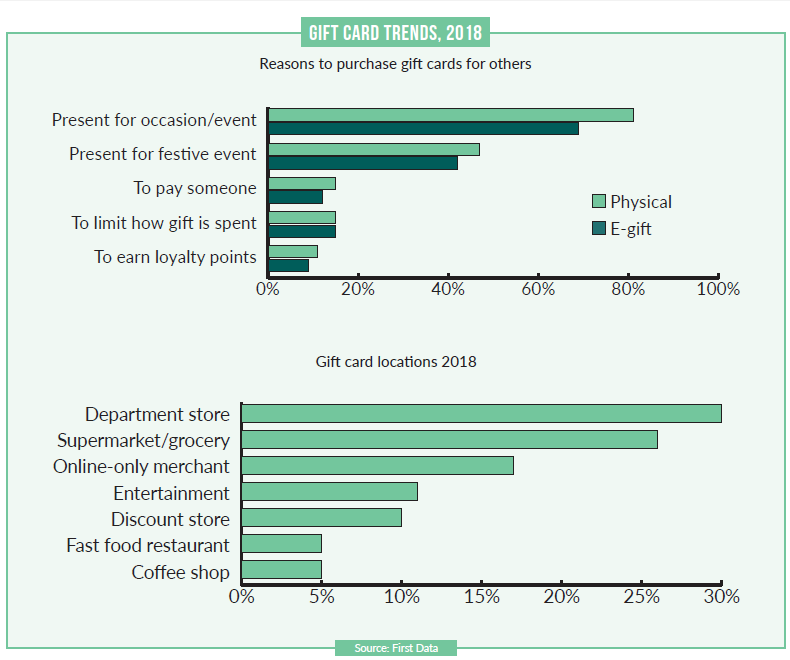 The UK Gift Cards and Vouchers Association (UKGCVA) has also been researching the impact of gift cards in the UK market. It found that 84% of people have purchased a gift card at some point in their life. Of those that have, 87% of them are purchasing gift cards at least once a year.

In the UKGCVA’s State of the Nation report, it states that no matter the age of the consumer, gift cards hold relatively similar levels of popularity.

In fact, 89% of Generation X (35-54 years old) and 86% of Generation Z/Millennial (16-34 years old) shoppers reveal they have purchased a gift card at some point in their lifetime, compared to a slightly lower 78% of Baby Boomers (55 years and over).

Younger generations are actually helping the gift card sector out. A gift card was purchased at least once every two months by 44% of Generation Z/Millennials; however, only 35% of Generation X admitted to the same, and even fewer (16%) Baby Boomers agreed.

UKGCVA director general Gail Cohen comments: “The 2019 research confirms the growing importance and relevance of the gift card as a consumer proposition across each generation of UK shoppers. However, with Generation Z and Millennials leading the way in terms of gift card purchasing frequency, it is now more essential than ever that the gift card industry evolves to meet the changing needs and desires of the modern consumer.”

Future of the high street?

Clearly, gift cards – and their physical forms in particular – are still in vogue, but is this enough to save the British high street?

Morea concludes: “To make the most of their gift card programmes, retailers and brands should look for gift card solutions that offer programme and card inventory management, streamlined digital gift card set-up, consumer engagement tools, distribution and provisioning technology, all while operating on a secure, trusted platform.

“These features will make it easy for businesses to try a variety of gift card options, and even customise cards to fit a specific season or promotion. We’ve found these unique campaigns can be highly effective in boosting sales.”