India and China are driving global mobile payments, but other countries will catch up

According to GlobalData’s 2018 Mobile Wallet Analytics, India and China are the markets with the greatest mobile wallet adoption. However, there is potential for markets with high cash usage across parts of Europe, Asia, and the Americas to become mobile wallet-dominated markets.

Such high mobile wallet adoption in these two markets is primarily driven by consumers not having access to or using cards to begin with, making mobile wallets the only widely available alternative to cash. In addition, high mobile wallet adoption in these countries is also driven by the availability of low-cost mobile phones, benefits such as cashback and discounts, and QR payments being possible without smartphones – as well as being cheap for merchants to accept compared with cards.

There is a general trend (as identified in the chart below) that high cash use compared to card use correlates to high mobile wallet adoption. More specifically, the chart shows that 11 of the 28 countries examined have the potential to become mobile wallet-dominated markets. It is likely that Southeast Asia will follow India’s and China’s path of initially being high cash markets due to a lack of payment cards, and then will move away from cash to mobile wallets.

In contrast, high cash markets in the developed world – such as Germany and Italy – are heavy on cash use due to cultural preferences and budgeting reasons. In these markets, consumers need to be persuaded away from cash payments. If this can be achieved, mobile wallets could replace cash in these markets, as there is not a strong card-using habit among consumers to stand in the way of mobile.

Overall, mobile wallet adoption is gaining momentum beyond India and China. Merchants will need to ensure suitable infrastructure is available for mobile payment acceptance in their stores. In addition, to encourage consumers to try the service merchants should partner with mobile wallet providers to offer rewards and discounts. Once consumers realise the benefits of paying with mobile wallets, they are likely to be willing to change their existing payment behaviour. Ultimately, both consumers and merchants will need to embrace the technology for mobile wallets to become a market’s dominant payment method. 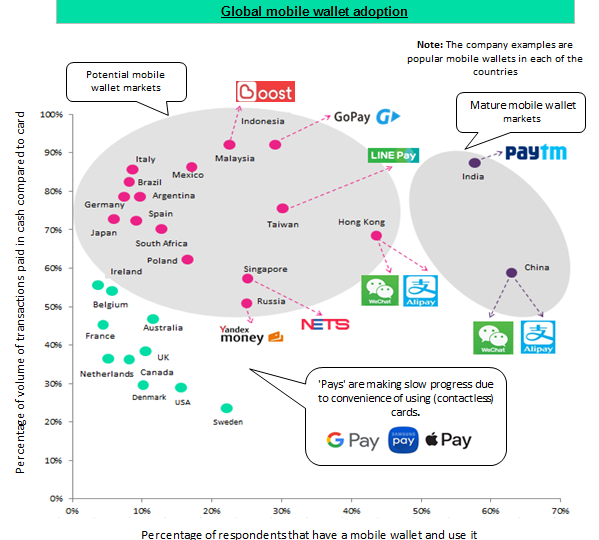