Rewards and benefits are the leading driver for continued mobile wallet usage across Asia Pacific, according to GlobalData’s 2019 Mobile Wallet Analytics. Therefore, mobile wallet providers should add additional features such as personalisation to existing loyalty schemes to maintain their popularity. Convenience is the second most important driver, meaning providers can rely to an extent on consumers continuing to use wallets once they have used them a few times.

In GlobalData’s 2019 Banking and Payments Survey, 44% of mobile wallet users in Hong Kong claimed that they were most encouraged to use mobile wallets for payments by the availability of rewards and benefits. Many mobile wallet providers across Asia are already utilising these rewards to encourage mobile wallet adoption.

For example, in Hong Kong, Alipay HK provides an e-wallet in the McDonald’s app, which permits mobile ordering and payments as well as Alipay rewards. Providers across other markets such as India also offer rewards and loyalty benefits to their users.

In particular, Paytm offers cashback of up to INR7,500 ($105) on petrol or diesel purchases at selected fuel stations in India. While there are several other examples of mobile wallet reward offers, such loyalty schemes should provide greater personalisation in order to encourage continued mobile wallet usage in the region.

Of second importance for Asia Pacific mobile wallet users was the convenience of mobile payments, which are seen as more convenient than cards. A notable 32% of Chinese survey respondents identified convenience as the top driver. Users are likely to find mobile wallets more convenient over time as there is no need for them to carry physical cash or debit/credit cards. Instead, wallets can be used to store their card information and transfer money.

Overall, mobile wallets are becoming an increasingly popular payment tool across Asia Pacific. Clearly, at this stage of the market’s maturity, wallets are now beginning to compete strongly on loyalty schemes and benefit programmes, in order to differentiate themselves in an increasingly competitive market. Convenience is still a major driver of use, but mobile payments have largely proven themselves in Asia as a dominant tool in this regard. They are now competing on other axes – unlike in the West, where consumers mostly still favour cards or cash. 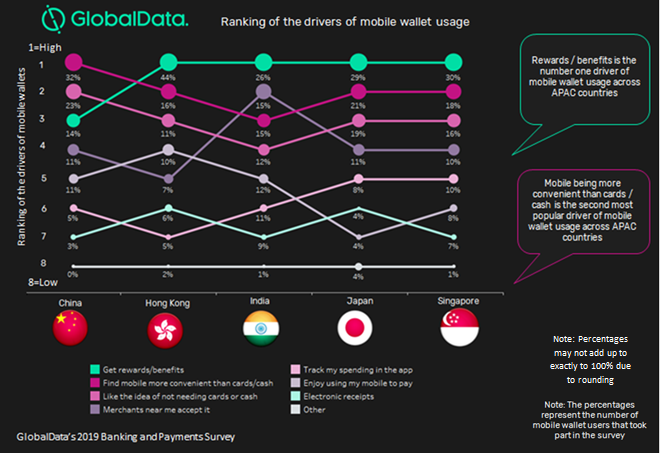