Western Europe lags behind Asia in mobile wallet adoption, but there is room for growth

The gap in mobile wallet adoption between developing and developed markets is a result of consumers disliking the idea of paying with their mobile phone. Only a small proportion of Western consumers are testing mobile wallets; most simply dismiss the technology on principle.

The survey results also highlight that the primary barrier to mobile wallet adoption in Western countries is that consumers dislike the idea of paying with their phone. Statistically, almost 40% of non-users do not like the idea of paying with their mobile in the UK, France, Germany, and Spain. This is because paying with cards is the mainstream option across many Western countries, and consumers have been comfortable using this method for a long time.

GlobalData’s 2018 Consumer Payments Insight Survey found only a limited number of Western respondents who tried mobile wallets found the experience inconvenient. In the UK, France, Germany, and Spain the percentage of respondents who have tried mobile wallets and found the experience inconvenient ranges between 2.4% and 4.1%. In contrast, in China, India, Hong Kong, and Taiwan this proportion ranges from 4.3% to 14.4%.

This shows that the key difference between East and West is that most consumers in the West have not tried mobile payments; their negative attitudes are not based on experience but on reaction to the concept.

Providers need to convince potential users that their mobile wallets provide benefits above and beyond the ability to pay at the point of sale, which consumers can already do via contactless cards.

Given the identified barriers for mobile wallet adoption in Western countries, in order to achieve critical mass providers should move the value proposition of mobile wallets beyond payments. This could be achieved by providing reward and loyalty schemes, which have worked well in India, where people buying fuel via mobile wallets receive a discount of 0.25%. While the West lags behind countries in Asia in terms of mobile proximity payment adoption, there is plenty of room for growth if mobile payments can offer enough to consumers to displace payment cards. 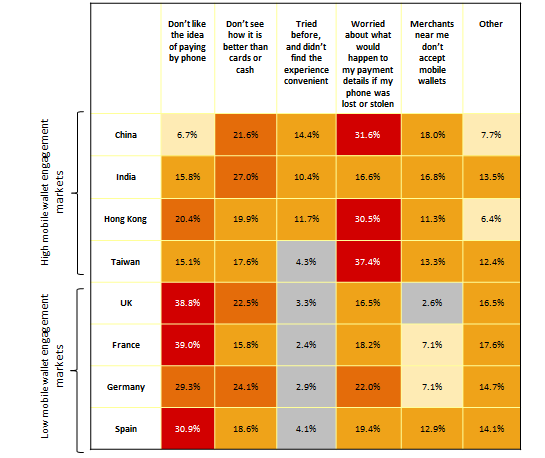 Figure 1: Lack of incentive for consumers to try and still less convenient than cards has caused the West to lag behind Asia in terms of mobile wallet adoption