Ogury’s latest report, a study of mobile web and app engagement is worth a glance to check out which banks and fintech challengers are taking market share.

For PayPal and TransferWise, the news is all positive.

TransferWise registers in the top two in each European territory bar Italy, where it places third. This includes number one spots in the UK, France, and Spain.

In the UK, TransferWise has a market share of more than 36% ahead of Worldremit with 28.2%.

The report examines the behaviour of over 1,265,000 mobile user profiles active during the three months from July to September and covers six markets; USA, UK, Germany, France, Italy, and Spain.

In the UK, the most popular fintech for app ownership is PayPal with 31.2% ahead of Android Pay with almost 25%.

To get a feel for the level of penetration of fintechs, Ogury examines the group of users who visited the homepages of major banks in each territory. It then analyses the percentage of this group also visit the homepages of fintech startups during the study period.

The same method was repeated with app downloads, logging the percentage of those who had downloaded an app from a major bank in their territory, and then also one from of our list of fintech startups

In terms of fintech adoption, the US, leads the way with 12.4% of US mobile users having downloaded at least one retail and one fintech app ahead of Spain (10.4%) and the UK (8.8%).

In terms of users who have visited the home pages of banks and fintechs, the US is way ahead at 14.3% ahead of France at 5.1% and the UK is again third on 4.9%.

Among the established banks, the report examines bank app ownership in each of the markets. In this category, Barclays ranks top in the UK with 25.7% ahead of HSBC (18.9%) and Lloyds (17.6%).

The report highlights in passing the work Santander needs to do in terms of its mobile offering; it fails to rank in the top five in the UK and in its domestic Spanish market, with a mere 12.7% lags way behind digital leaders Caixabank (33.2%) and BBVA (24.5%). 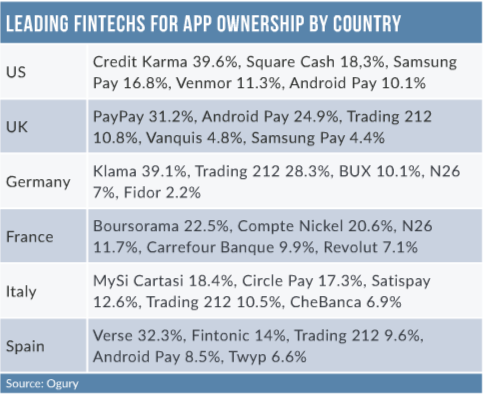 Zaggle and Visa partner on payments solutions for SMEs and startups May 25, 2020 Verdict Staff
Recommended article