Pakistan is a cash-dominated society. Use of cash for day-to-day transactions remains prevalent due to factors such as a high unbanked population, limited financial awareness, and an inadequate payment infrastructure.

Financial inclusion remains a top priority, with the government and other commercial banks introducing initiatives to improve banking penetration. The government launched the National Financial Inclusion Strategy in May 2015, aiming to bring 50% of the adult population into the formal banking system by 2020.

There were 425,199 agents operating in Pakistan as of December 2018. United Bank Ltd (UBL) offers UBL Omni branchless banking services through its network of 42,000 agents – branded as Omni Dukan – located in 900 cities and towns in the country.

Credit cards are not popular among Pakistani consumers, accounting for only 3.7% of the total payment card transaction value in 2019. This is because banks typically follow stringent application procedures, and because Islam forbids the charging of interest. 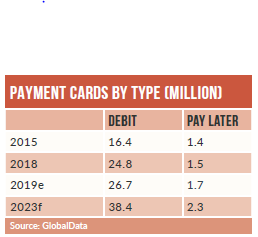