Rated lessors should withstand Fitch’s base case scenario without breaching leverage or liquidity downgrade triggers, given reduced purchase commitments, manageable debt maturities over the next 12 months, and, in some cases, recent draws on available borrowing capacity, the rating agency said.

Key near-to-medium term rating sensitivities, aside from liquidity management, include the pandemic’s effect on operating cash flow given increased lease deferrals and/or defaults, the impact of potential airline bankruptcies, aircraft repossessions and higher potential leverage due to impairments.

Fitch-rated aircraft lessors reported that nearly 90% of airlines have requested rent deferrals. However, deferrals have only been granted to a select number and typically for two to three months, with payback following the deferral period, including interest.

For rated lessors, contracted rent deferrals ranged from 2% to 12% of annual rental revenues, which Fitch believes is manageable.

A second round of rent deferral requests is possible, depending on the length of lockdown measures and the pace of travel demand recovery, which would further impair aircraft lessor operating cash flow generation in the second half of 2020.

Some lessors have drawn on bank revolvers, while most have cancelled nearly 40% of near-term orders for unplaced aircraft to shore up liquidity and reduced near-term funding needs, which Fitch views as a credit positive.

An increase in aircraft repossessions could reduce residual values, resulting in impairment charges. However, no material impairments have yet been reported by rated lessors given limited airline liquidations and related repossession/aircraft sale activity.

As of Q1 2020, most standalone investment-grade aircraft lessors had the capacity to withstand impairments of 4% of fleet net book value before exceeding Fitch’s 3.0x downgrade trigger.

The highest four-year average impairments comparatively reported in 2016-2019 was 1.6% across Fitch-rated lessors, driven by assets sales rather than aircraft value depreciation.

Fitch’s global base-case economic outlook assumes easing of the pandemic in the second half of 2020 and increased broad economic activity, as inventories are rebuilt and some consumer and capital spending is re-profiled, the company said.

However, GDP is unlikely to reach pre-virus levels before mid-2022 in the US and significantly later in Europe.

Issuers that have already been downgraded and/or placed on RWN have weaker liquidity positions (particularly in the event of materially reduced cash flow), limited capitalisation headroom to withstand moderate impairments, older aircraft with concentrations and/or elevated exposure to less liquid aircraft types.

Liquidity coverage holds up under stress 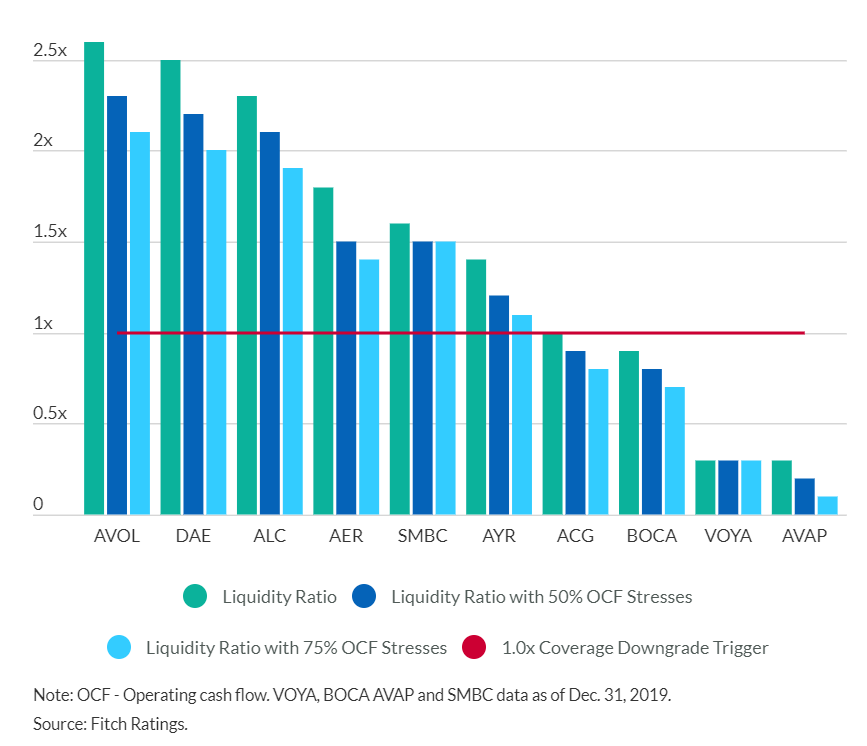