China Life has more bad news for shareholders,
this time a warning that its attributable profit for 2011 will be
down between 40% and 50%.

The warning from China’s largest life insurer
indicates that it had a very tough second half and will follow a
21.8% decline in its attributable profit in the first half of 2011
to CNY12.96bn ($2.05bn).

Taken in the middle of China Life’s expected
profit decline – 45% – its attributable profit in 2011 will come in
at about CNY18.5bn.

This will be the lowest level since 2008 when
it reported a 51% decline in attributable profit to CNY19.14bn
following a slump in investment returns.

In its profit warning, China Life stated that
the primary causes of the profit setback are a decline in
investment yields and impairment losses. 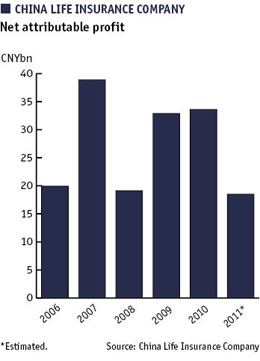 China Life also appears to have fared poorly
in terms of premium income in 2011 having fallen 6.2% in the third
quarter compared to the life industry’s 13% rise.

China Life’s closest rival, Ping An appears
set to deliver reasonable results in 2011 unless it suffered a
severe setback in the fourth quarter of 2011.

This excluded a CNY1.95bn charge related to
the consolidation of its 52.4% stake in Shenzhen Development
Bank.