Covid-19: Private Wealth AuM down but income up

Large parts of the global economy have been in lockdown since mid-March and the effects of the disruption are now being felt on the wealth management industry – a bit of a mixed bag as we start to see the impact on client portfolios but with key metrics still strong. In the short term, wealth managers are benefiting from the churn in the market, but they are in for lower earnings and some lean quarters in the long run.

A clutch of US banking giants with global reach reported results this week, and in them we can see the signs of the first effects the crisis is having on the wealth industry around the world. Citigroup, Bank of America Merrill Lynch, Goldman Sachs, JP Morgan, and Morgan Stanley all filed Q1 2020 reports, and unsurprisingly their client assets under management (AUM) were down 11.8% from end-of-2019 totals – a blow to any wealth manager to be sure but one that could have been much worse given the state of the securities markets. Citi had the worst time of it with AUM at its Global Consumer Bank down 17%. This reflects the strong presence this most international of banks has in Asia Pacific, which declined 19% over the first quarter and was the first region to suffer significantly due to the pandemic, though its much smaller Latin American divisions actually fell more. This suggests that further declines are likely for wealth managers into Q2 in regions more recently hit by the COVID-19 crisis.

The second notable effect of the crisis on these players was an increase in their revenue despite AuM declines. The yo-yoing of the financial markets also meant a spike in trading revenue for these players as clients bought and sold assets and securities. Any wealth manager earning income from executing their client’s trades will have benefited in the first quarter of 2020 and even Morgan Stanley, which saw a margin decline in revenue for its wealth arm, noted strong client activity. Unfortunately, as the crisis drags on and uncertainty drains from the market, this revenue boost will swiftly wither, leaving wealth managers simply with lower AuM on which to charge coveted annual fees.

The final notable wealth metric in the reports was net client inflows. The four reporting this noted inflows were strong in Q1, even Bank of America Merrill Lynch and Morgan Stanley, which reported quarter-on-quarter declines in net inflows that were up compared to the same period last year. This suggests that wealth managers are not yet seeing their pipeline for new business dry up as a result of the crisis. The first quarter was still minting enough new millionaires to more than offset any losses.

However, the full lockdowns across Europe and the US occurred in the second half of March, and the widespread unemployment, reduction of income, and inevitable resulting recession have yet to truly bite. Wealth managers are fortunate there is little risk of widespread losses on their loans to their cashed-up clients the same way there is in the retail bank, but the recession will start to bite in Q2 and Q3 as emergency support is withdrawn and new wealth dries up. 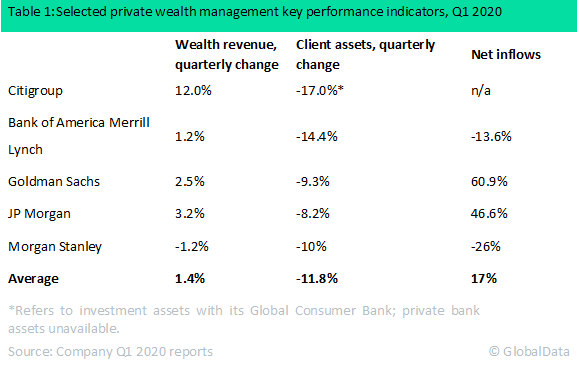