The medical effects of COVID-19 on Australia are still building, with caseloads rising and likely to continue doing so for some time. GlobalData examines the effects of the global financial crisis (GFC) for clues as to the impact on banks and the financial health of the nation, with implications not just for Australian banks but all mature banking markets facing down a COVID-19 recession. While still early days, indicators are that short-term bank profits will plummet, loan growths will stall, impaired loans will begin to rise, and the industry will see further consolidation.

The mounting direct medical toll is predicted to be grim and the measures needed to contain it are also shaping up to be devastating to the economy. Ever a leading indicator, the ASX 200 has cratered with the benchmark index well and truly in bear market territory – over 30% down as of writing. Large swaths of the service economy have been closed with unemployment numbers mounting to levels not seen in modern history. While not an ideal comparison, the banking sector’s experience with the last international crisis, the 2008 GFC, is the best guide.

Review of the GFC and predictions for the COVID-19 crisis

While a very different shock, there are lessons to be learned that suggest some short-term and long-term considerations for Australian banking:

Given the expected scale and length of the disruption to the Australian economy, it’s no surprise that key banking indicators will suffer. The government stimulus measures for the banking sector and broader economy will limit the fallout, however, and at no time does it look like the banking sector will be pushed to the brink – even if profits suffer, there still will be profit. Even though NPLs will go up, it should be manageable given the government support.  ADIs will suffer and not all will endure but it should be manageable.

What will be enduring is the effects that mass unemployment, possibly long-term, will have on lending and the increased use of automatic digital decisioning on loans. Large swaths of Australians are about to become non-standard risks and lenders are going to have to be able to roll with that for years to come – those that can adapt will be among the fewer lenders that we see in 2025. It is a tale that mature banking markets around the world will be telling as they endure their own version of the COVID-19 recession.

Figure 1: While faster moving than the GFC suggests, a collapse in bank profits, consolidation, and years of higher NPLs seem likely 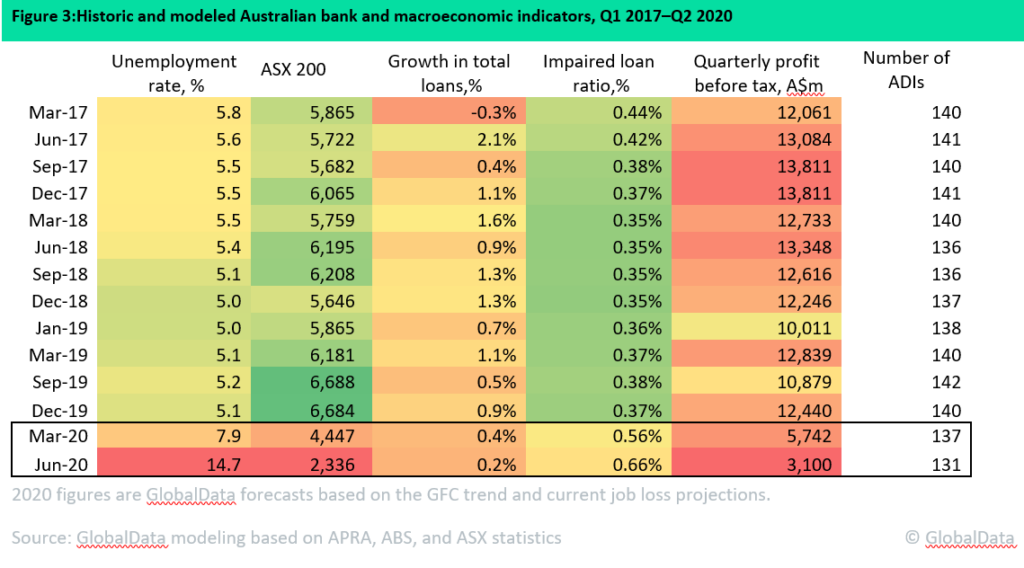