Global economies are collapsing due to the coronavirus pandemic. As the number of cases continues rising globally, forcing governments to take strict action, markets where investors lean heavily on stock market-driven investments will suffer the most.

As of March 23, the number of coronavirus cases has surpassed 330,000, predominantly in China but increasingly in Europe and the Americas as well. Unfortunately, only a small number of countries have been able to avoid the medical tragedy, and none will be able to avoid the brutal economic impact of this pandemic, meaning a global recession is now on the cards. However, the composition of each market’s retail investment portfolio will shape the initial impact and determine how wealth managers should react. 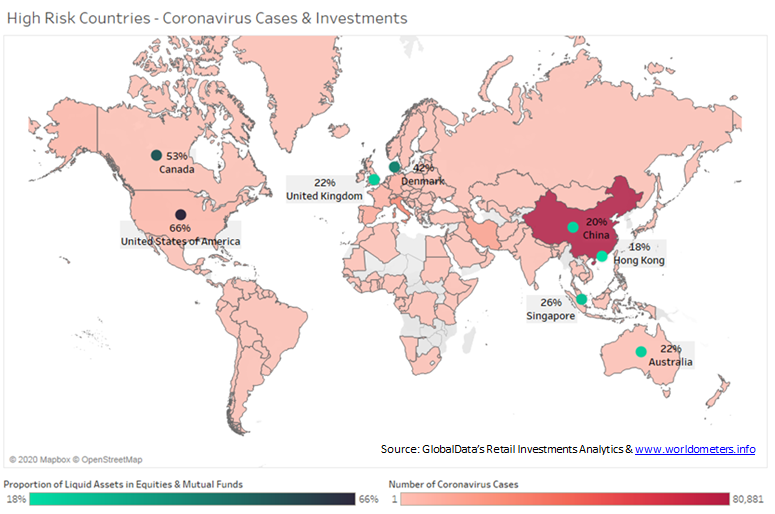 Stock market investors in both the US and Canada will suffer the most. Our Retail Investments and Savings Analytics shows that equities and mutual funds compromise the majority of the average portfolio in the US and Canada, 66% and 53% respectively. This places both countries in the top three globally for share of investments in these risky asset classes. The Dow Jones and both New York and Toronto Stock Exchanges have been tumbling, especially in March. The NYSE is mirroring a position last seen in Q1 2013, while March 19 marked the TSX’s worst day since 1940 as it plunged by 12%. Interest rates were also cut, meaning no part of the investor portfolio will be exempt from the pain, even if investors have long been shifting away from the low-returning deposits since the financial crisis drove down interest rates more than 10 years ago.

The majority of the average portfolio across European countries leans more towards less risky asset classes such as deposits, rather than the more adventurous kind like equities. This does make them less prone to risk than those across the pond. In the UK, for example, just 22% of the average portfolio is held in equities and mutual funds. With that being said, this higher risk part of the portfolio is suffering and will continue to suffer. The FTSE 100 in mid-March was echoing the same position during the last financial crash. And, with the base rate in the UK being dropped to 0.25%, UK investors too are in for a bumpy 2020.

New Zealand is the only Asia Pacific country where the average portfolio leans more towards equities and mutual funds than other asset classes. Other countries in the region tend to be more risk-averse. Despite China being the worst hit by the virus so far, 72% of the average portfolio in the country is held in deposits, meaning they are less exposed to risk. In comparison, deposits in the average portfolios of other APAC countries tend to account for around a fifth or a quarter. Nevertheless, they will not avoid the local or global economic downturn due to COVID-19, so may see a dip in deposits to support consumption due to poor automatic social stabilizers. Even the developed markets such as Hong Kong and Singapore are suffering, as investors go into panic-selling mode as a result of sharp declines in stock markets.

Many economists have previously highlighted risks to the global economy, but the severity and speed of the crash was always unknown. Wealth managers will have their work cut out for them, as this is when their expertise will need to shine. The one positive that can come out of this is that it will soon be time to buy. The decade has started off very bumpy, and it will remain so for most of the first half of 2020, but there is light at the end of the tunnel and wealth managers need to be ready to reassure and accommodate.