Goldman Sachs was the leading financial adviser globally for mergers and acquisitions in the first three quarters (Q1-Q3) of 2019, according to GlobalData.

GlobalData has published a top 20 league table of financial advisers ranked according to the value of announced M&A deals globally.

JP Morgan took second place with a total deal value of $777.9bn (down 10.83% year-on-year) from 211 deals it advised on during the period. The American bank bagged the second position in GlobalData’s H1 2019 rankings, having advised on $659.8bn worth of deals.

Goldman Sachs and Rothschild & Co led the chart in terms of volume, advising 249 deals and 245 deals, respectively in the first three quarters of 2019. JP Morgan secured third position with 211 deals followed by Lazard with 194. 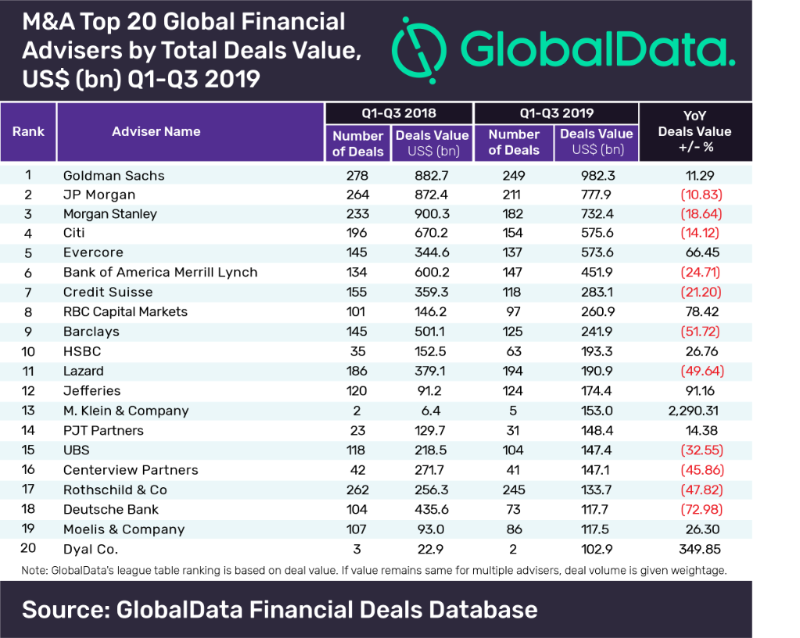 “Despite advising on the second highest number of deals, Rothschild & Co settled at 17th rank due to its involvement in only two megadeals and low-value transactions”.

To ensure further robustness to the data, the company also seeks submissions from leading advisers, through adviser submission forms on GlobalData’s website