Since the 2008 global financial crisis, income growth for banks in advanced economies has stalled while costs have increased. Operating in low interest rate environments with growing regulatory burdens, banks must work harder to survive.

To make matters more difficult, efficient challengers with advanced digital platforms have increased competition further. The need for banks to adapt their strategies to this new normal has never been greater.

Despite many banks undergoing significant cost reductions since the crisis, many are still operating with high cost-to-income ratios. This is because they have struggled to increase income per customer sustainably and consistently. Using data from our Global Retail Banking Analytics tool we have identified only three banks in the Australian, New Zealand, and Canadian markets that have achieved the enviable status of increasing income and reducing costs.

One of those banks is Bankwest, which has focused relentlessly on productivity and efficiency initiatives and generating more value from existing customers. In the years prior to its acquisition by Commonwealth Bank of Australia (CBA) in 2008, Bankwest expanded its branch network to Eastern Australia. While it doubled its customer base and diversified away from the devastation of the mining bust, it incurred significant customer acquisition costs.

By 2012 income growth was strong and driven by a competitive product proposition, particularly its Premium Select Home Loan product. Cost reductions were made by moving to a new call center model and consolidating loan processing functions. At the same time, the credit quality of its loan book improved and disciplined expense management was maintained.

From 2013 onwards, Bankwest paid much more attention to productivity rather than simply cost reduction or expense management. Initiatives that improved financial performance, customer satisfaction, and the bank’s operational risk profile took priority. Much more emphasis was placed on data analytics capabilities, which enabled Bankwest to manage customers by value and needs rather than obsessing about sales targets to compensate for customer churn.

Investment in analytics combined with help from CBA positioned Bankwest to be able to respond to buying signals from customers, resulting in improved cross-selling. This is a far cry from many banks’ expensive mass marketing campaigns that reach consumers not in the market for financial products or services.

Operational costs have a tendency to grow and are unlikely to be maintained through short-term initiatives. This makes Bankwest’s achievement all the more impressive. Between 2010 and 2017, Bankwest paid a lot more attention than its competitors to customer acquisition costs.

Although it lost market share in credit cards (-1.6% pp) and personal loans (-0.4% pp) over the period, it is generating more revenue per customer and is in a stronger and more sustainable position than many of its competitors. The branch reductions along the East Coast in 2018 will likely see further reductions in the bank division’s cost base, while its 2017 adoption of Blaze – its enterprise-wide agile project – should see more rapid deployment of new products and functionality, ensuring Bankwest remains one of the most efficient brands in the Australian market. 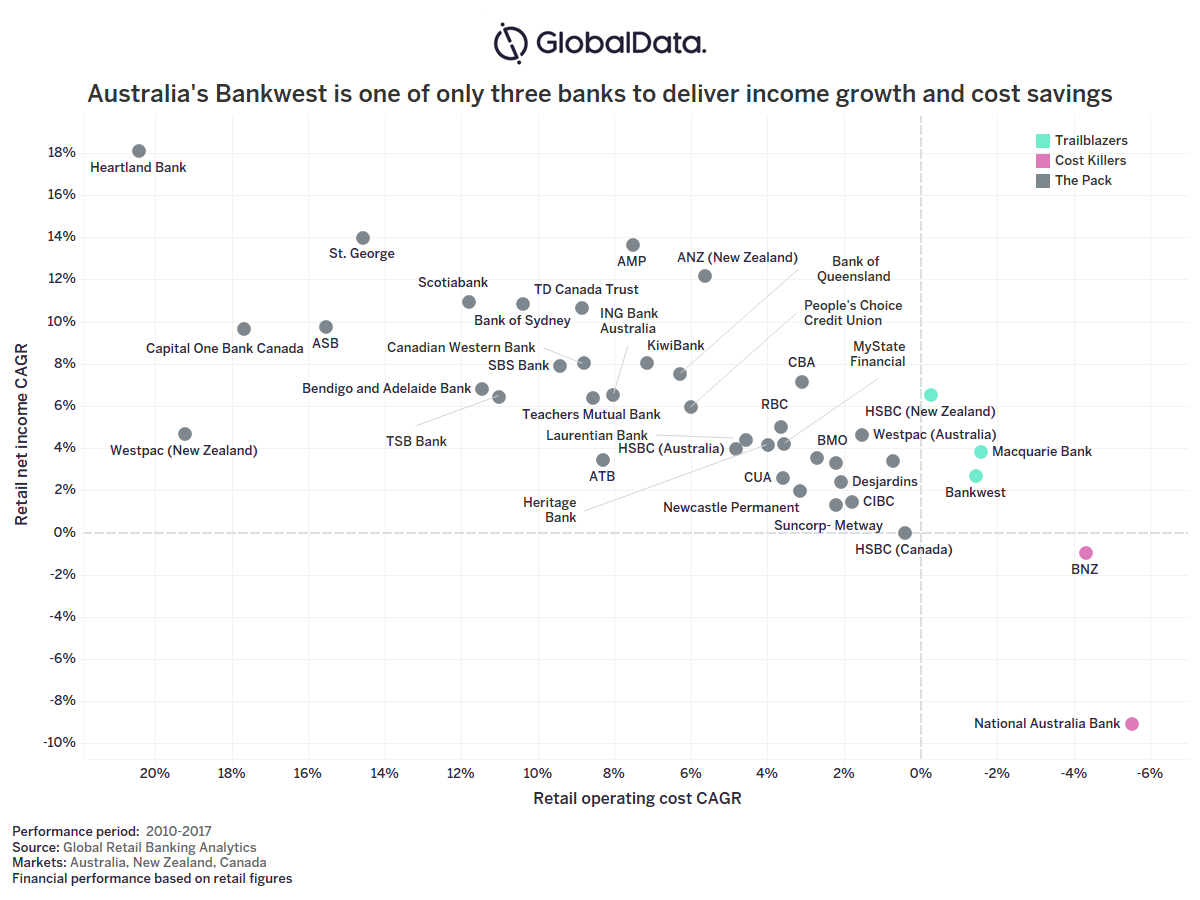