By embracing the newest technology through third-party integration and partnerships, global banks can emulate their Swedish counterparts and be rewarded with new channels, enhanced security, and significantly lower operating costs.

For banks facing the looming prospect of updating their legacy systems, there are good reasons not to, for the task is somewhat akin to changing the engines of a jet plane in mid-flight. Current accounts typically require 24/7 availability and regulators often demand access to data on decades-old systems, making updates extremely costly. The disastrous way that TSB handled its modernisation by cutting corners is just the latest proof for some that legacy systems are better left alone.

However, whereas the downsides often include large costs, annoying customers, and potential fines, the price of doing nothing is also significant. Maintaining systems typically uses 80% of a bank’s IT budget and this will become ever harder as staff with the required knowledge continue to retire. Standing still also risks the bank being overtaken by challenger banks that will be able to leverage better, cheaper products with more choice and personalisation, such as arranging a mortgage through Alexa or a smart car.

Yet with the strategic use of fintech partnerships, digitisation, and a focus on productivity gains, banks large and small can emulate their successful Swedish counterparts. GlobalData’s Global Retail Banking Analytics database shows that banks in Sweden that have pursued digital strategies have been rewarded by significantly falling costs to income. 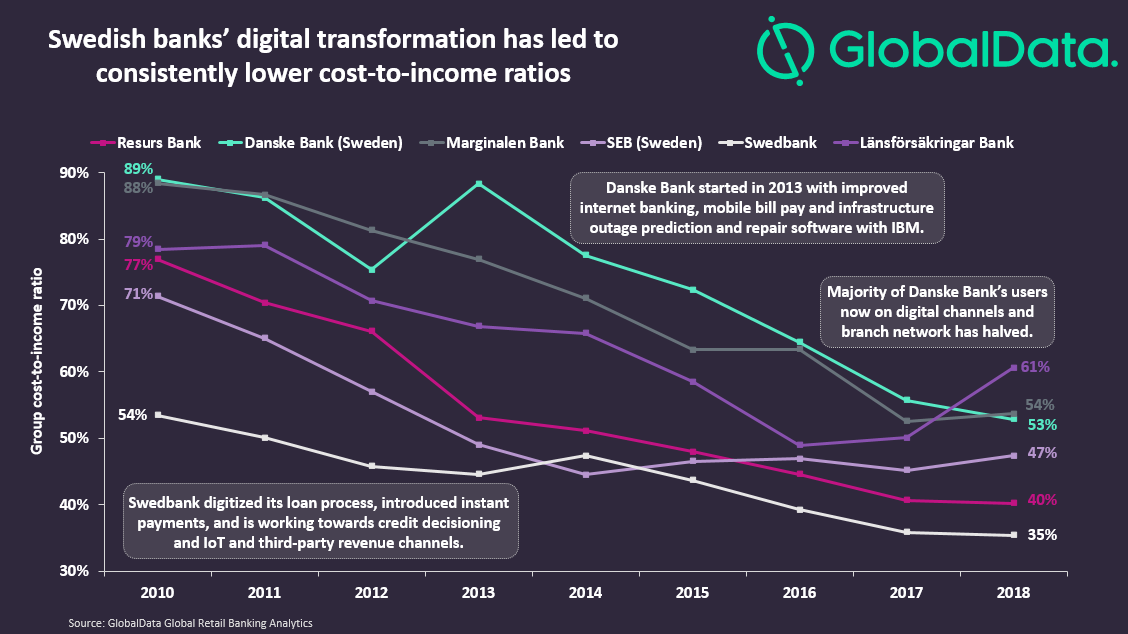 A common theme among the most successful is the willingness to work with innovators. Both Swedbank and Danske Bank have benefited from automating, security enhancing, and cost-saving technology, rewarding them with cost-to-income falls of 18 percentage points (pp) and 36pp respectively. SEB has also continued its ambitions to integrate new partners onto its platform, taking advantage of new tech and revenue streams outside its existing channel ecosystem.

Swedish banks have also used new technology to componentise their offering, breaking down their systems piece by piece, rather than carrying out the costly act of replacing them entirely. Marginalen Bank, for example, has been partnering with Tieto on multiple fronts since 2008, providing core banking to Marginalen including PCI DSS card services as well as its business rules analytics technology. This uses live data and machine learning to reduce costs, allowing the bank to perform dashboard analysis and capture creditworthy customers missed by conventional methods.

In comparison, Swedish banks that have seen stagnant cost-to-income ratios include Nordea, which only started transforming its legacy systems in late 2018, having been digitally outflanked by its competitors in the past few years.

Although the risks of digital transformation are far from low, the rewards, as demonstrated in Sweden, can be significant. Global banks should learn from the benefits of strategic fintech partnerships, digitisation, and a focus on productivity gains when considering how to improve their cost and income fundamentals.