Analysis of recent bank reviews by ratings agency Fitch, in banking markets previously identified by GlobalData as vulnerable to COVID-19 disruption, shows that Spanish and Italian lenders are most likely to suffer from the ongoing market turbulence.

As COVID-19 spreads throughout the world, GlobalData identified that banking markets in Europe, China, and Canada are most likely to be disrupted.

Similarly, in the last month, a large number of ratings actions have been taken against lenders in these countries by Fitch. The vast majority of actions have resulted in either downgrades to long-term issuer default ratings, a negative outlook, or ratings watch. And while it was stressed that the likely deterioration in asset quality would occur for virtually all reviewed banks, there were noticeable differences in each market. 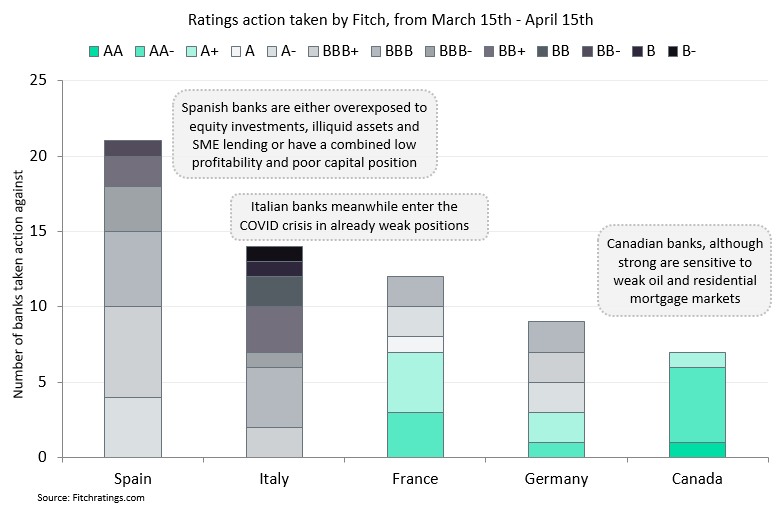 GlobalData has shown that the Spanish and Italian banking markets have seen the largest number of warnings issued while also currently having the lowest default ratings.

Meanwhile, banks in Italy such as the famous Banca Monte dei Paschi di Siena, as well as Banca Carige and Iccrea Banca, enter the COVID-19 crisis already weakened. Poor asset quality and lack of profitability had already damaged their ‘commercial effectiveness’. Other banks such as Banca Popolare are too regionally-centric, making them vulnerable to local industries such as tourism.

Similarly, German banks such as Deutsche Bank and Commerzbank, while stronger than banks in Italy, have also been going through a period of restructuring, leaving them in a weak position as well before the effects of COVID-19 have struck.

French and Canadian banks, however, such as BNP Paribas, HSBC Canada, and Bank of Montreal, while considered robust, are still expected to suffer worsening asset quality. This is particularly the case if they are overexposed to sectors such as oil and gas, equity investments, and residential property, which are expected to suffer this year.

Coronavirus timeline: how has it affected financial services? May 26, 2020 Patrick Brusnahan
Verdict Staff