A new UK e-money platform has been launched. However, unlike many of its digital peers it is resurrecting a very old idea. Tally – which is both the name of the firm and the currency it offers – operates a full reserve currency model, where each Tally (t) is backed by 1 milligram of physical gold, locked in a secure vault.

While this idea is not new, Tally has improved upon it. By partnering with Mastercard, users can buy Tally and spend it like any other currency. In other words, Tally has digitised gold.

The benefit Tally is keenest to promote is the inflation-proof nature of its currency. It has a point: since January 1970 gold has risen from £14.50 an ounce to £1,145 at the time of writing. That represents an average annual increase of 9.2%. This compares to UK inflation increasing at 5.7% per year. Another benefit is the lack of charges to customers. Currently there are no transaction or foreign exchange fees, no foreign exchange mark-ups, and no ATM charges. In addition, customers can rest easy knowing that Mastercard is widely accepted in the UK and most parts of the world.

Tally presents a problem for incumbent banks. For many years, banks have offered low savings rates, often below the level of inflation. The rate for easy-access, low-interest savings accounts has hovered at around 1%. But after a decade of these rates, consumers are starting to change their behaviour.

GlobalData’s UK Savings 2018: Review, Forecasts, and Future Opportunities report shows that a greater number of consumers are re-evaluating the wealth they hold in cash deposits and are transferring it to higher-yielding investments. Similarly, GlobalData’s 2019 Banking and Payments Survey shows that unlike lower-income groups, 60% of mass affluent consumers are prioritising asset accumulation over debt repayment.

For both emerging affluent and mass affluent consumers, Tally represents a potentially better alternative to cash and an inflation hedge – all with the personal liquidity of a debit card. It is also likely to be popular among younger, digitally-savvy individuals who want to dip their toes into personal financial management. This type of service would also be well received by customers in emerging markets. In countries like Malaysia, South Africa, and Turkey, Tally could represent a real benefit to consumers wanting to protect their savings from significant currency falls.

Incumbent banks should be wary of this new challenger. It may be based on a quaint idea, but it has the potential to be a more profitable way to keep liquid assets than low-interest savings. 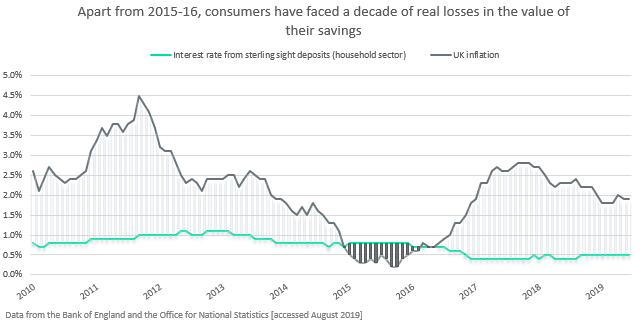