The Hong Kong Monetary Authority (HKMA) approved the market’s first batch of virtual banks at the end of March. The first wave is dominated by the incumbent brands, as local banks are alive to the threat posed by such pureplay digital banking solutions. As with other markets, the real disruption from the launch of neobanks will occur first among the young, but it holds the potential to be much wider ranging.

Standard Chartered, Bank of China (HK) and mainland insurer ZhongAn secured the first three licenses for virtual banks in Hong Kong. Clearly, its largest banks are embracing the shift into digital and it is likely they will have hordes of neobanks nipping at their heels before long.

The next batch of five licenses under consideration by the HKMA will include Tencent and Alibaba’s Ant Financial, both serious competition given the ubiquity of WeChat Pay and Alipay on the mainland, to say nothing of their thriving digital ecosystems.

The market in Hong Kong is also ripe for neobanks, like much of Asia in fact. Hong Kong consumers are very enthusiastic about digital-only banks, more so than in Australia, where neobanks are now beginning to offer services, or in the US and the UK, where neobanks are already well established.

And while millennials (roughly corresponding to the 25-34 year olds age bracket in the chart) are once again the most enthusiastic supporters of the trend, there is a notably strong appetite among all age groups up to 55 years. This is much more pronounced than in other markets in the West.

With the combination of high profile banking brands and the high degree of consumer appetite for digital-only banks, Hong Kong’s entry into the neobank realm is virtually guaranteed to be big and, potentially, highly disruptive. Banks in other markets around Asia Pacific, particularly those in Greater China, need to take note and prepare. 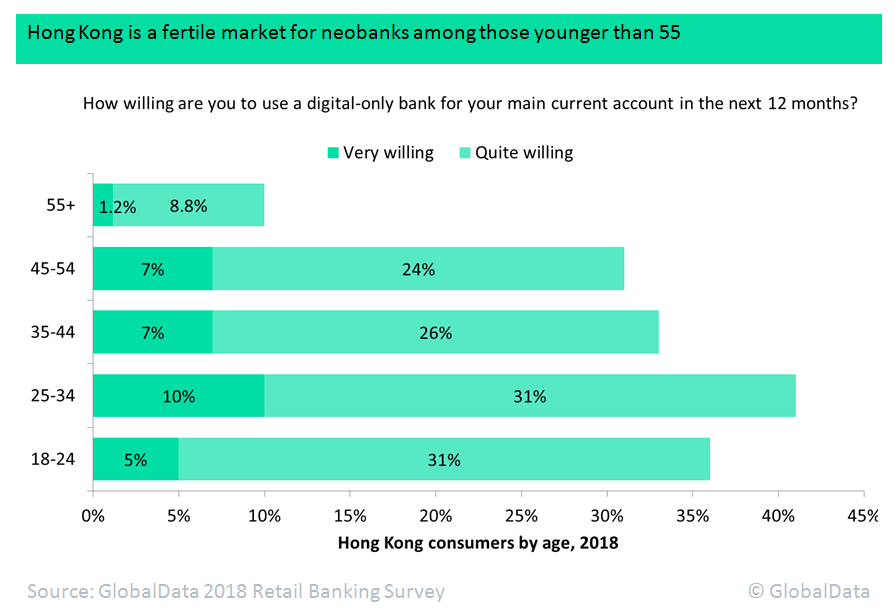