Lloyds, RBS, and Barclays are ready for the impending mortgage storm

A new regulation has prompted a flood of money to pour into the mortgage lending market, creating difficulties for smaller players by compressing their net interest margins (NIMs) and offering incumbent banks a chance to recapture market share.

The introduction of ring-fencing legislation in January 2019 has forced large banks to separate their retail and investment activities, resulting in a flood of retail deposits into the UK mortgage market.

HSBC, for example, has sought to transfer £35bn ($46bn) into the mortgage lending sector, in an effort to boost its current market share of 6.5% up to 11%. Similarly, Lloyds has agreed to buy Tesco Bank’s mortgages, gaining 0.3% share, and Sainsbury’s Bank is looking to sell its own mortgage book, which is valued at £1.3bn ($1.68bn). The weak growth picture has also kept interest rates low, leading to fierce competition, particularly for mortgages. Introductory rates of 1–2% and greater incentives, such as £1,000 ($1,290) cashback and free valuations, are becoming more commonplace. This, in turn, has led to margin compression for mortgage providers, starting a protracted mortgage price war.

Increased competition is already resulting in visible signs of strain in the UK market. Profits for Nationwide and Santander UK fell 40% and 17% in 2019 respectively, largely due to compressed mortgage rate margins. The highly regulated and capital-intensive nature of retail banking is also putting pressure on smaller players. Metro Bank and Co-op Bank have reported losses of £3.6m ($4.66m) and £38.5m ($50m) in the first nine months of 2019. In this environment, scale becomes a crucial factor for success. This is something that many newer entrants, such as the supermarket banks, do not have.

As competition continues to increase, banks’ NIMs and cost-to-income ratios (CIR) will become increasingly important. The current market favors incumbents that can rely on lower funding costs through a larger customer deposit base. Additionally, high levels of cross-selling have forced smaller providers to offer better mortgage deals just to stay competitive. However, as competition increases, smaller providers will find it harder to offer better rates than incumbents, leaving their market share vulnerable to them. 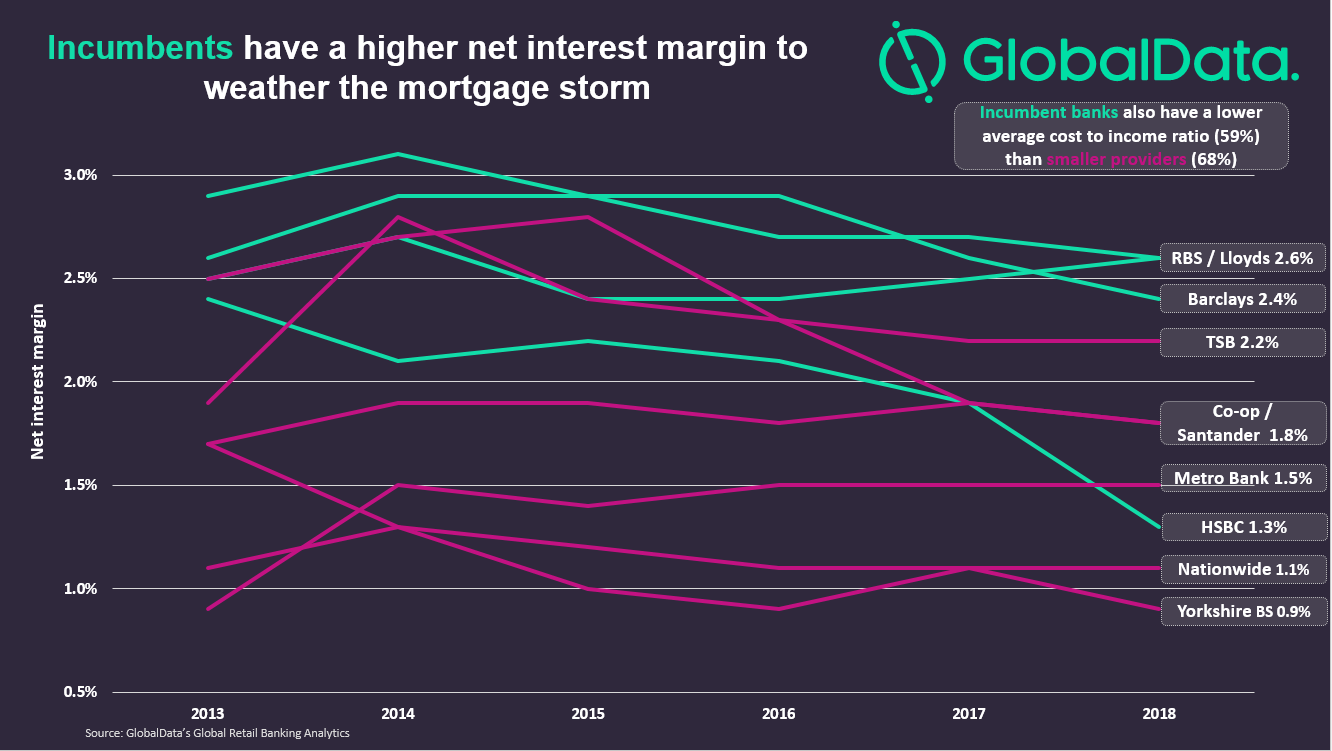 GlobalData’s Global Retail Banking Analytics shows that the average NIM of the incumbents – Lloyds, HSBC, RBS, and Barclays – for 2018 was 2.23, compared to 1.82 for the other banks. This is despite a sudden drop in NIM from HSBC, a factor that shouldn’t affect the bank’s push into the UK mortgage market due to a lack of alternative places to invest its retail deposits. Similarly, the average CIRs for incumbent banks was 59%, lower than 68% for smaller providers. These buffers should help incumbents weather the mortgage storm and recapture market share from struggling providers.

In the current low-growth, low-rate environment, incumbent banks can take advantage of their comfortable interest cushion and advance their mortgage market shares, which have slowly eroded over the past few years.