UK banks are coming under pressure to slash costs as low interest rates continue to squeeze margins. Operational efficiency in banking is commonly highlighted by cost/income ratios – that is, the ratio of total operating costs (excluding bad and doubtful debt charges) to total income (the sum of net interest and non-interest income).

In today’s business environment, where banks require rigorous efficiency to remain profitable, Lloyds Banking Group’s aim is to become simpler and more efficient. According to Lloyds’ 2018 annual report, its cost/income ratio fell 3 basis points to 49.3%. In comparison, Royal Bank of Scotland posted a 2018 cost/income ratio of 71.7%, while both HSBC and Barclays reported cost/income ratios in excess of 60%. These results suggest Lloyds has far greater control over its costs than its competitors.

This demonstrates the advantage of Lloyds’ simple, low-cost retail and commercial bank business model. With its current momentum Lloyds Bank is targeting a cost/income ratio in the low 40% range by the end of 2020, which would make it one of the most efficient European banks. 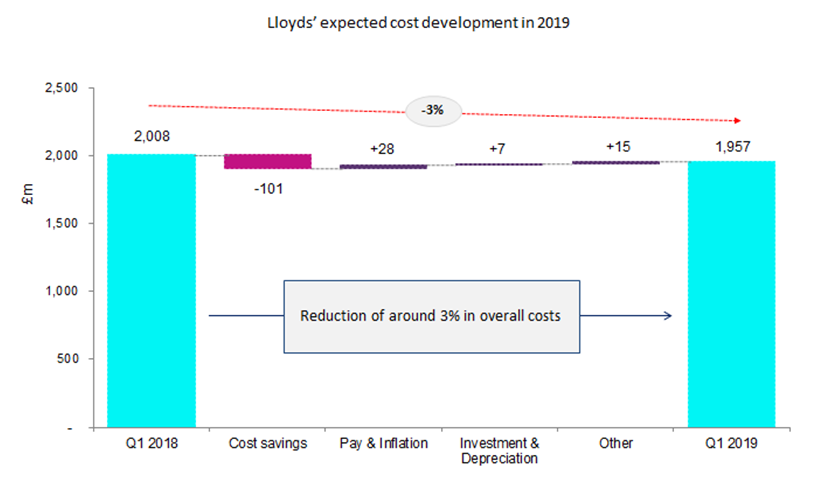 If we closely observe movements in Lloyds Bank’s operating costs, it seems costs are tightly managed each year. 2018 costs were 3% lower than in 2017 and 20% lower than in 2010, despite investment in the business. Q1 2019 results also showed progress in this direction. The low costs were driven with efficiency savings more than offsetting increased investment.

Lloyds’ superior cost/income ratio provides it with a competitive advantage over other players. As pressures on efficiencies continue, other banks in the UK must move beyond tactical cost reduction measures if they want to catch the market leader.