UK mortgage market to follow a gentle trajectory in 2019

With Brexit delayed until October 31, affordability issues plaguing the UK housing space in 2019, and interest rate rises looking unlikely, it appears that activity in the UK mortgage market will remain sluggish compared to 2018.

In Q1 2019, the economy grew at a slower pace than the last few quarters, and the UK’s current position is somewhat mixed. “House price inflation has moderated in recent months yet it still remains above earnings growth, so affordability is still a challenge for would-be borrowers,” says Jackie Bennett, director of mortgages at UK Finance.

Our UK Mortgage Market 2018: Forecasts and Future Opportunities report confirms that the UK mortgage market picked up slightly in 2018. However, it is possible that this trend could reverse depending on the future economic climate. Data from UK Finance (as shown in the chart below) shows that the underlying trend in housing transactions, which witnessed a moderate growth last year, has softened a little in the first quarter of 2019. 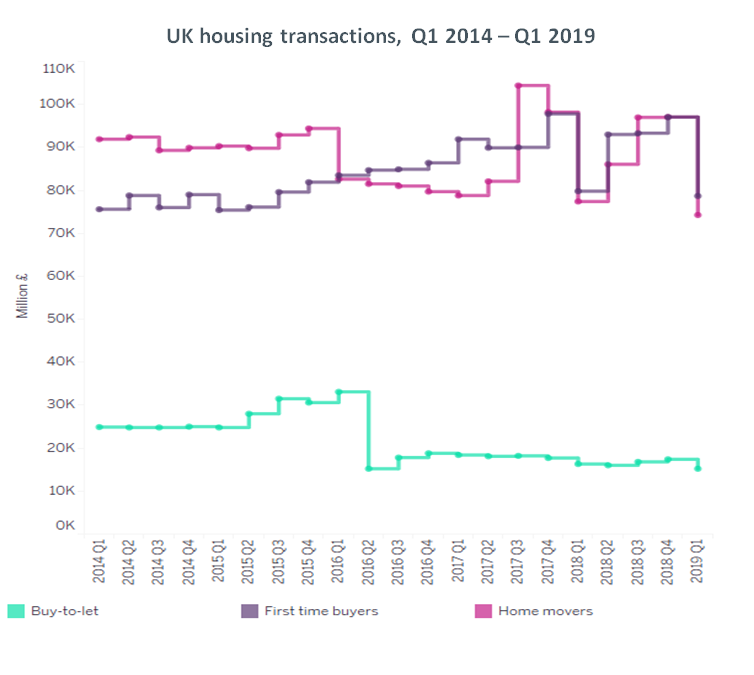 Despite a slight boost in 2018, the market remains relatively subdued with a decline in activity among both first-time buyers and home movers in the first quarter of 2019, in the face of low buyer confidence. According to Bennett, the full impact has yet to be felt, with buy-to-let borrowing set to be further affected by changes to tax and regulations. The likelihood of any movement in the Bank of England base rate is also low after its increase to 0.75% in 2018.

First-time buyers are continuing to drive house purchase lending, outperforming home movers over the last few months in terms of volume (as shown in the chart above). Hence, they are crucial to the overall wellbeing of the UK housing market with each transaction having a ripple effect further up the chain.

Due to weak housing transaction activity and delayed Brexit negotiations, both buyers and sellers are waiting to gain a clearer picture of where the economy might be headed. As a result, we expect overall activity in this sector to grow only moderately in 2019.