UK current account switches for the year to end March 2020 total 1,017,354, up 10% year-over-year. Notably, Monzo has the highest net switching gains for the first time, followed by Nationwide and Lloyds. Starling Bank and NatWest are in fourth
and fifth respectively for net switching gains.

On the other hand, Santander, TSB and Halifax are the three biggest losers.

February saw the highest monthly total of business account switches on record. Business switching volume totals between January 2020 and March 2020
is up 52% compared to the previous quarter.

The Current Account Switch Service has now completed 6.6 million switches since launch. Over 113,000 switches took place in March 2020 alone. That is the highest monthly total since March 2016 and the third highest ever recorded.

Awareness and satisfaction levels for the switch service remain above the regulatory targets at 79% and 92% respectively.

The key difference in switching behaviour continues to be the age of the consumer. In the past three years, of those who switched over the age of 45, 70% used the Current Account Switch Service. This figure drops to 45% for those aged 34 and under and 36% of those under the age of 25. 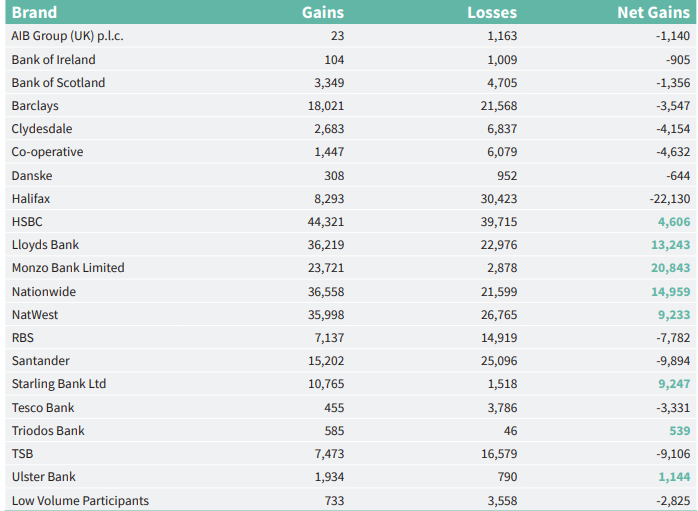