Banking employment numbers continue to hold up at the largest banks in the US.

So much for the notion that declining branch numbers and the rising use of AI will hit employee numbers.

Branch numbers are down by 4% across the largest US retail banks in the past year.

But the reduction in branch numbers is not yet translating into cuts in employee numbers.

Across the 30 largest US banks by FTEs, total FTEs drop by only 0.4% for the year to end June.

Wells Fargo remains the largest bank by employees with total FTEs flat year-over-year at 235,000. Over the same period, it shuttered over 300 branches, reducing its branch network to 5,567 outlets.

In your opinion, what presents the biggest operational challenge for FS providers in the COVID-19 crisis?

Moreover, Wells Fargo employee numbers remain in excess of its 227,000 FTEs a decade ago following its acquisition of Wachovia.

By contrast, Bank of America continues its cost-cutting strategy. BofA is on a mission to control expenses and streamline its retail banking operation. Not only did it sell its international consumer credit card unit, it continues to cut jobs and branches.

But it is Citi that remains the most aggressive in terms of cutting jobs. In the year to end June 2019, Citi’s FTE numbers are down by 4% or a net 6,800 jobs.

Employments numbers continue to rise at a number of leading banks with ambitious expansion plans.

For example, employee numbers are up by 11% at Ally Bank in the past year, an increase of 700 FTEs.

Santander FTEs are also on the rise, by 4% to 10,910 despite further cuts in its branch network.

That trend is likely to continue as it ramps up its retail banking ambitions and expands its product range.

In 2018 PricewaterhouseCoopers forecast that almost one-third of financial-services jobs could be displaced by automation by the mid-2030s.

At the same time, the head of Citi’s investment bank suggested that it might axe up to one half of its technology and investment staff.

Roughly one half of all jobs in retail banking, in customer service, back and middle office, are reportedly under threat. That is a fairly typical and rather gloomy forecast from analysts in discussions about optimising AI and machine learning.

Such forecasts may yet come to pass but at least meantime, FTE numbers are holding up across the US retail banking sector. 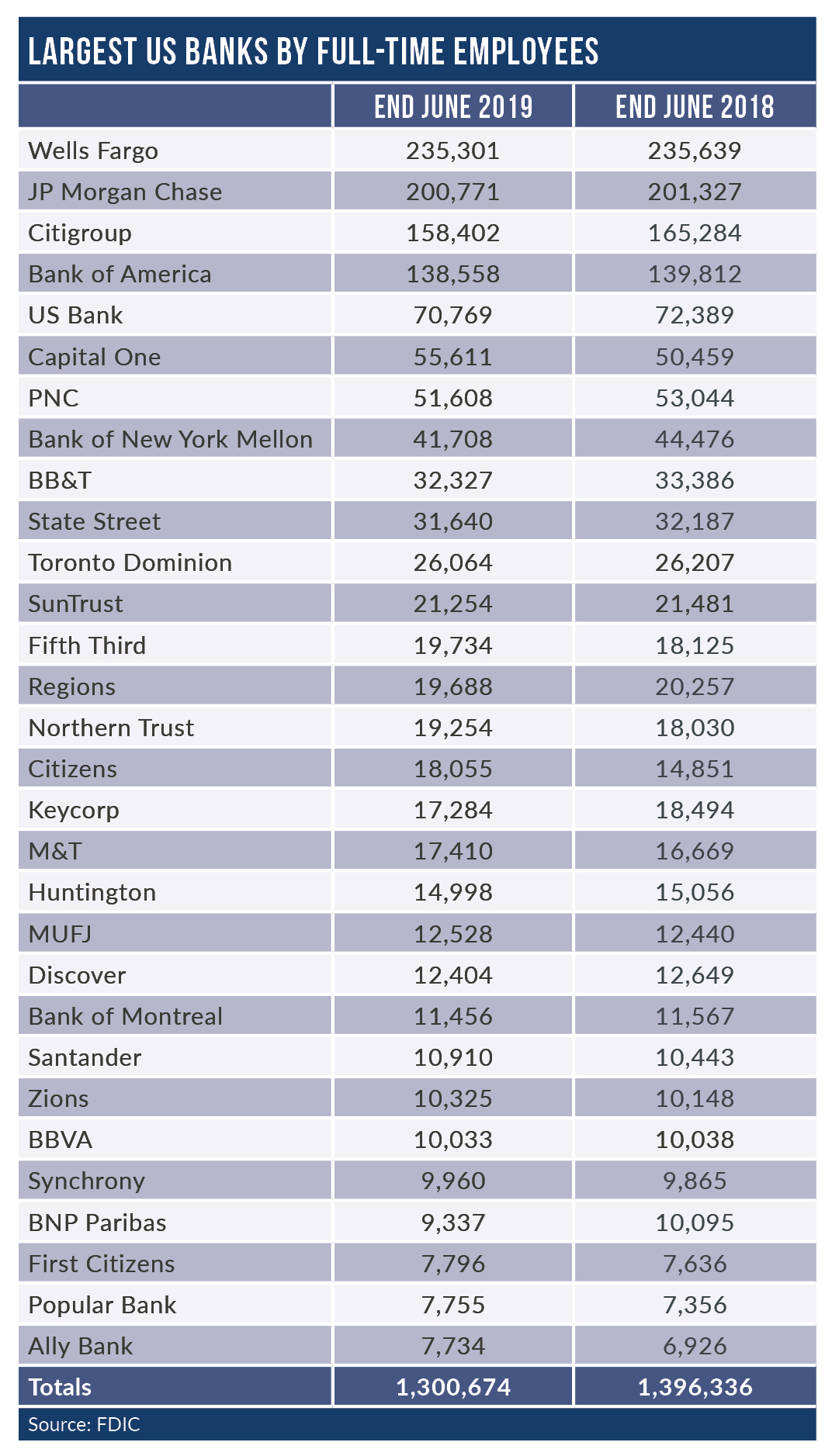