US branch closures are accelerating with 4% of outlets closing in the past year at the country’s largest retail banks.

Specifically, Wells Fargo, Chase, Bank of America and US Bank have all axed over 100 branches in the past year.

But by international comparisons, the US remains over-branched and there remains scope for further large scale branch closures.

As US branch closures slowly ramp up, Capital One is the most aggressive in terms of shrinking its network.

In the 12 months to end June, Capital One closed one in five of its branches. The Capital One branch network is down to 488 outlets from 604 branches at end June 2018.

Consequently, Capital One has closed over 50% of its branches since its network peaked at 991 outlets in 2010.

FDIC-insured commercial bank branch numbers across the US peaked at 88,056 units in June 2009.

US branch closures ramp up but is the US still over-branched?

Such figures suggest that the US remains significantly over-branched by international comparison.

Take the UK as an example.

There remain twice as many branches per head in the US compared to the UK.

Together, the largest 25 US retail banks by branches (listed below) account for around 37,000 outlets – almost one half of all US branches.

The number has reduced by one-third since the financial crisis. For example, in 2009 there were a total of 6,994 FDIC-insured commercial banks in the US.

Further back, in June 1994 there was more than 10,700 FDIC-insured commercial banks in the US.

Wells Fargo remains the largest US bank ranked by branches with 5,567 branches.  In the year to end June, Wells Fargo closed over 300, about 5% of its branches.

Wells Fargo branch network peaked at 6,795 outlets in 2009 following its acquisition of Wachovia and its 3,363 branches.

Of the major banks, Chase remains the most enthusiastic advocate of the branch channel at least in terms of numbers.

It then bucked the trend towards shrinking branch numbers by adding to its branch channel. The Chase branch network peaked at 5,697 outlets as recently as 2013.

At the same time as retiring branches in markets where it is strong, Chase is expanding in select markets.

In particular, Chase is expanding into nine key markets, growing its network in Greater Washington, Philadelphia and Boston.

By contrast Bank of America’s branch network has reduced each year since peaking at 6,238 in 2009.

Citi was one of the first US banks to prioritise rightsizing of its branch network. As a result, it has already completed much of the heavy lifting. In the past two years, the Citi US branch network is down by only seven units.

Citi is now only the 15th-largest bank by branches but retains its spot as the fourth-largest US bank as measured by deposits.

Likewise, SunTrust is shrinking its network aggressively. In the past 12 months, SunTrust closed 84 outlets, almost 7% of its branch estate.

SunTrust has now closed one in three of its outlets since its branch estate peaked at 1,759 units in 2008.

By contrast, Toronto Dominion’s branch network is relatively unchanged. TD ends the first half with 1,244 outlets, down by little over 100 since numbers peaked at 1,336 in 2013.

Other major international players have been relatively slow to shrink their branch networks.

BBVA closed only three branches in the year to end June and now runs 642 outlets.

Likewise, Bank of Montreal has closed around 15% of its branches since its network peaked at 708 in 2012.

Santander has been slightly more aggressive with one in four of its branches closing since the crisis. 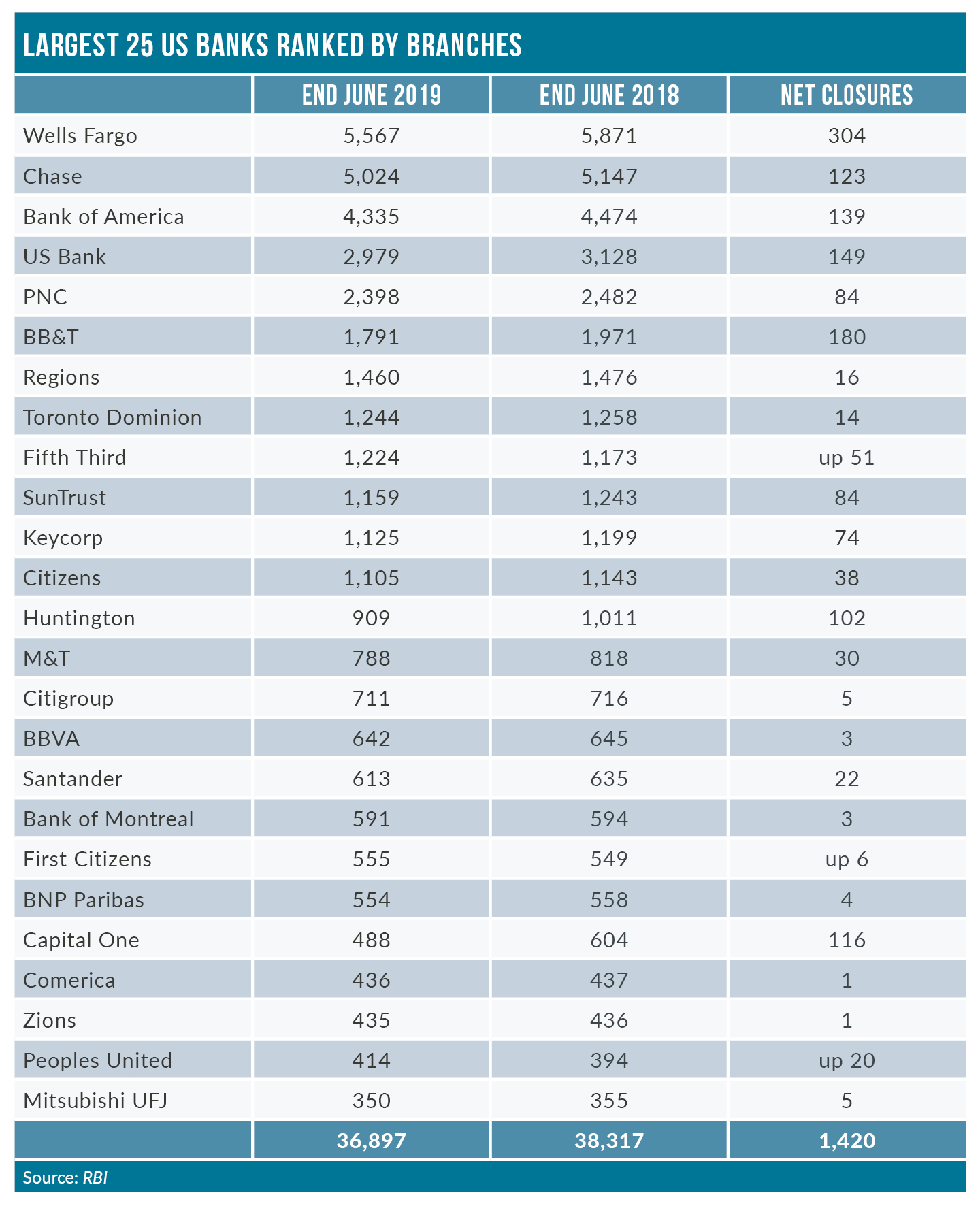 PFM tools must tell customers much more about their finances to deal with the COVID-19 crisis March 27, 2020 GlobalData Financial Services
Verdict Staff