Royal Bank of Scotland ranks joint bottom of the 16 largest UK lenders for customer satisfaction; as part of its fightback, RBS is to launch a digital sub-brand dubbed Bó. Douglas Blakey looks at the winners and losers in an increasingly competitive market.

The increasingly competitive UK retail banking sector is to become even more crowded next year with the launch of Bó from RBS. A large number of incumbent banks around the world have tried to tap into the growth in digital banking with the launch of digital sub-brands. Few have enjoyed the success of the original sub-brand in the modern age, first direct.

That HSBC’s branchless first direct subsidiary topped the UK’s first regulationmandated survey for customer satisfaction came as no surprise. An impressive 85% of first direct customers said that they would recommend the bank in terms of overall service quality. It was also little surprise that Metro Bank (83%) and Nationwide (73%) rounded off the top three ranked brands.

Since it was established by Midland Bank in 1989 – it became part of HSBC when that bank acquired Midland in 1992 – first direct has enjoyed a class-leading reputation for customer service. By contrast, parent brand HSBC scored 13th equal, with Cooperative Bank with a pretty dismal rating of only 55%. Only Clydesdale and Royal Bank of Scotland (both 49%) ranked below HSBC.

RBS is making all the right noises about redoubling its efforts to improve its dire customer satisfaction rating. It is also plotting the launch of a digital sub-brand, apparently to be dubbed Bó, with a launch in 2019.

Bó will aim to tap into the opportunities offered by AI and big data to optimise the customer experience. Beyond that, little is known of RBS’s digital sub-brand plans. The UK retail banking sector is markedly different from the one in which first direct launched 29 years ago. In the 1980s, when first direct launched a branchless bank, it was a novelty.

The UK market was dominated by the so-called Big Four of Midland, NatWest, Barclays and Lloyds to an even greater extent than today. Less than two in three UK adults held a current account in 1989, compared to over 90% today.

In addition, around 13 years ago, prepaid cards were rolled out in the UK. The prepaid card offered an alternative for customers who did not want a full current account and also represented a new form of competition to the traditional banks. 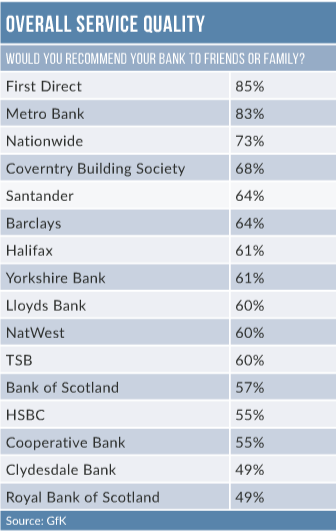 By 2010, 26 of the 32 banks and building societies that existed in 1960 were absorbed into just six major groups: Barclays, HSBC, Lloyds, Nationwide, RBS and Santander; the
six held a combined 89% share of the current account market.

Since 2010, 19 new retail and commercial banking licenses have been issued, with at least eight more pending. Starting with the launch of Metro Bank in 2010, the UK market has become a crowded and increasingly competitive sector.

There are also the niche specialist banks, such as Aldermore and Shawbrook, Masthaven and Redwood. Non-bank brands include Sainsburys, and especially Tesco Bank, while RBS’s Bó will have to go head to head with the increasing number of digital-only brands.

The latter group includes Monzo, Starling, Tandem and N26. A number of banks, such as BBVA, have invested in existing digital startups such as Bank Simple and Atom in the UK. France’s BPCE did likewise with its 2016 acquisition of Fidor.

The concept of an incumbent bank launching a digital sub-brand from scratch wins RBS no prizes for originality: it has been tried all over the world by established banks with varying degrees of success.