It seems like another world. In 1981, the then big four UK retail banks – NatWest, Barclays, Midland and Lloyds – operated a combined UK branch network of 11,400 outlets.

NatWest was some 19 years away from being acquired by Royal Bank of Scotland and boasted a network of 3,370 branches, ahead of Barclays with 3,014.

The ownership structure of the traditional big four has undergone a radical change. Back in 1981, Barclays owned a 35% stake in Bank of Scotland, Midland owned the Clydesdale Bank, while Lloyds held a 16% stake in RBS.

The three Scottish brands – RBS, Bank of Scotland and Clydesdale – have between them closed more than three-quarters of their Scotland-based branches since 1981, almost 1,200 branches in total.

In 1981, the TSB was in the process of bringing together around 20 regional savings institutions and developing a nationwide branch network capable of competing with the big four. TSB operated 1,661 branches in 1981, against 559 today. 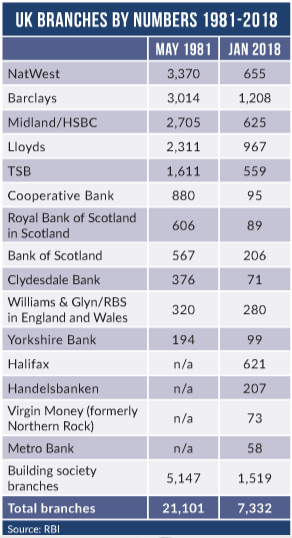 Legislation in 1986 enabled building societies to offer current accounts and SME loans, and to demutualise. The second-largest society at the time, Abbey National, converted to a bank in July 1989 and was subsequently acquired by Santander in 2004, rebranding to its parent group in January 2010.

The biggest demutualisation was the country’s biggest society, Halifax. It converted to a bank in 1997, merged with Bank of Scotland in 2001 to form the ill-fated HBOS, and was acquired by Lloyds in 2009. The country’s largest society today, Nationwide, accounts for almost half of all society branches, with a network of 680 units; other notable society branch networks include Coventry (87), Yorkshire (70), Skipton (62), Nottingham (60) and Leeds (53).

The branch network least affected by closures since RBI first published is the one most likely to attract press attention in coming years: RBS’s branch network in England and Wales.

Branded as Williams & Glyn (W&G), the network comprised 320 outlets in 1981; today the branches are branded as RBS and total around 280 units. Following the crisis, RBS tried – and very publicly and humiliatingly failed – to spin off the branches under a plan that would have resurrected the W&G brand.

As recently as 2016, RBS planned to list W&G on the London Stock Exchange, with a then 307-strong branch network serving about 1.4 million retail customers and more than 200,000 SME customers. It is difficult to see RBS wanting to rebrand the existing network – around 280 Royal Bank-branded branches in England and Wales – as NatWest.