With the negative environmental impact of plastic pollution becoming more apparent over the last couple of years, businesses are only just beginning to realise how much they are contributing to the plastic crisis and several are taking steps to ban plastic altogether.

Today, ten anti-plastic start-ups out of the 100 that applied, were able to pitch to a panel of judges about how they have created a concept which will reduce plastic pollution and could be used by the John Lewis Partnership as well as many other companies.

Here are five innovations from anti-plastic start-ups that you should know about: 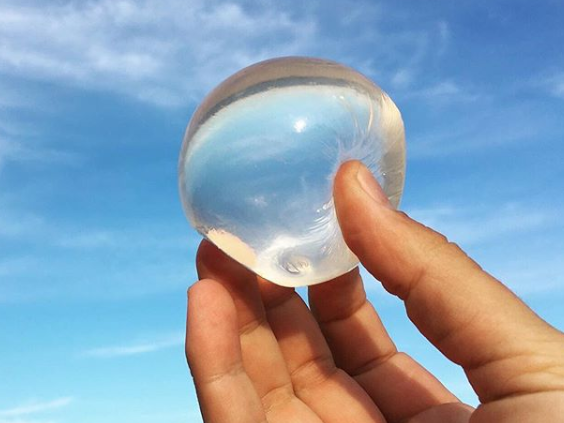 The Skipping Rocks Lab is just one of the anti-plastic start-ups based in the UK and is on a mission to make single-use plastic disappear. Its first product, Ooho, aims to provide the convenience of plastic water bottles but reduce the negative environmental impact by encapsulating water in spherical packaging made of seaweed. The idea is that consumers will put the sphere in their mouth and eat both the thin seaweed layer and drink the water at the same time.

One issue with this product is that it currently only works with small amounts of liquid but this makes it popular at events such as races where runners need a quick sip of water but don’t need a bottle. This summer, The Skipping Rocks Lab partnered with Just Eat to trial replacing ketchup sachets with edible seaweed packaged ketchup. The seaweed spheres could also be used in the cosmetics industry.

Fishy Filaments is a company based in Cornwall in the UK which repurposes fishing nets and turns them into engineering grade filament for 3D printing.

Currently, the nearest fishing net recycling plant for fishermen based in the UK is in Slovenia and so the company is attempting to fill a much-needed gap in the market.

Fishy Filaments hopes that its 3D printable retail material will be used to create long-lasting products and want to avoid supplying the single-use packaging industry.

Cuantec is a Scotland-based start-up company hoping to decrease plastic pollution by taking food waste from fishery processors and turning it into compostable antimicrobial food packaging that extends the shelf-life of fresh food.

The company up-cycles langoustines shells which are naturally anti-microbial, biodegradable and compostable. Cuantec first turns the waste fish products into the natural biopolymer, chitin, which is in demand for over 3000 industrial uses across the globe.

Chitin has previously been turned down for packaging uses before because of its yellow colour but Cuantec claims to have a new process which can create clear materials from the product. Perhaps the best part about this food packaging is that if it does end up in the ocean then sea creatures could eat it and no harm would come to them because it is made of fish.

The Bees Wax Wrap Company is another start-up hoping to break into the recyclable packaging sector. It sources most of its beeswax from around ten miles outside of its workshop in the UK and uses it to create Beeswax Wraps. These wraps, which can be sustainably dyed different colours, can last up to a year and can be used instead of cling film to store food items. They are washable and once they are no longer suitable for use they can be burnt or composted.

The company says that the wraps are naturally anti-microbial and antibacterial but more testing needs to be done to see if they can be used on the likes of chicken and other contaminating foods. One downside to the product is that the wraps are quite sticky and have a faint smell but this is not thought to transfer to food and after they have been washed a few times the stickiness is said to fade.

The start-up company Replenish was founded by Jason Foster when he was ironing his shirts and realised that the ironing spray he was using was 90% water with 10% of additional ingredients. This sparked the idea of reusable plastic spray bottles which only require the consumer to buy a capsule of the cleaning product they would like and then they click this onto the bottle, add their own water and the product is ready to be used.

A downside to the Replenish bottles is that they do still create some plastic waste but the company hope to use more recycled plastic in the future and the level of plastic pollution created will be a lot less than what the cleaning product industry creates now.

Charlotte is a staff writer for the Verdict network. She can be reached at Charlotte.Edwards@verdict.co.uk

Guy Opperman: Workers should invest their pension in green businesses