The coronavirus pandemic has illustrated how dependent society is upon its key workers. It has also shown how the vulnerable – those without homes or jobs – are the most exposed to the virus and its economic fallout. Social enterprise Beam, which crowdfunds training and resources to get homeless people into work, has refocused its efforts during the crisis to help the homeless into key worker roles.

“Beam is currently supporting homeless people into jobs that have seen a surge in demand during the crisis, provided it’s safe for them to start work,” says Beam founder and CEO Alex Stephany.

“Many of these are key worker roles including warehouse operatives, NHS workers, carers, supermarket assistants and cleaners. While these roles may not require prior training, we’re able to remove other financial barriers such as childcare, travel to and from work, work attire and PPE. We’re also able to fund online training for people.”

Beam helps individuals create a tailored career plan that makes the most of their skills. Their profile is then shown on the Beam platform, where people can donate to their campaign, with all money going straight towards their reskilling and associated costs.

In normal times, charities or local authorities refer applicants to Beam. But now hard up individuals can also self-refer via a newly created online portal.

“With employment services becoming overstretched and many employees getting furloughed, we’re using technology to help an even wider group of disadvantaged people who have lost their jobs as a result of coronavirus,” says Stephany.

“We will provide them with free personalised employment support such as CV writing and interview coaching. This new approach is about empowering people in urgent need of the service to take the first step themselves.” 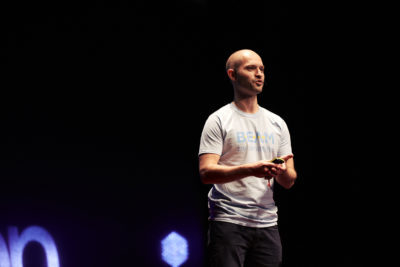 Alex Stephany is the CEO and founder of ethical crowdfunding company Beam.

Stephany launched Beam in 2017 after a homeless man he bought coffee for at his local tube station had a heart attack. It got Stephany thinking that cups of coffee could only do so much to help and so he drew upon his previous technical experience as CEO of parking-sharing app JustPark to create the Beam platform.

Since its launch it has funded 246 campaigns and got 73 people into work.

Beam: Working with the NHS

During the pandemic, Beam has helped raise £1200 for Enya, who was at risk of being made homeless. She had been her father’s full-time live-in carer, but when he passed away last year without putting her name on the housing forms, her local council denied her the right to continue living there.

The money she has received via Beam has been used to fund an online IT course, laptop and portable WiFi router to train remotely. Her campaign was fully funded in one day by 30 supporters.

Beam has also launched an Emergency Coronavirus Fund, which provides short-term relief to homeless families during the coronavirus pandemic.

“Through donations from the public, we’re able to deliver emergency care packages to those in need,” says Stephany. “For example, we’ve been able to fund a laptop and electronic tablets for homeless single mum Sonia, so that her kids can do their school work from home.”

In February Stephany told Verdict that the social enterprise was looking to take its platform to other cities, such as San Francisco in the US, which has high levels of homelessness despite being home to the world’s largest tech firms.

“To be honest, any of these big tech companies could fund for Beam to launch and operate in San Francisco, and they could do that with the stroke of the pen,” he said.

But in light of the pandemic, Beam has turned its focus to more immediate matters closer to home.

The organisation has been collaborating with partners in the UK, such as Ocado and EY. In April Beam was selected by NHSX – the innovation arm of the health service – as one of 18 innovative digital solutions to be awarded up to £25,000 to support vulnerable people during the pandemic, under the TechForce19 challenge.

“We’re really keen to open up our network as much as we can to support people to get into jobs they want and we as a society rely on more than ever,” says Stephany.

Stephany believes that there are too many “smart” and “capable” people out of work who have been “underserved” by services and technology.

“Our vision from a technology standpoint is that we should and we must build technology for this group – who are obviously not wealthy – but is every bit as good as Spotify and Netflix are building for wealthy, lucky people like me,” he says.

“And once we do that it’s a win for everyone.”

Employers looking for workers can get in touch with Beam to use their free service here.