Forget the BRICs, the G7 or even the E7 countries – if you want to grow your business it’s all about the mid-size emerging economies: Columbia, Poland and Vietnam.

According to the latest Global Economy Watch report from PwC, these ‘pockets of opportunity’ offer some of the best prospects for companies looking to grow in new markets.

The three countries average annual growth rate is set to overtake the UK’s projected two percent. Vietnam has the most positive outlook of the three, as its estimated long-term annual growth rate is predicted to be around five percent annually, compared to Columbia’s average which is around three percent, and Poland’s average is set at 2.5 percent.

“UK businesses have a lot to gain from engaging with fast-growing emerging economies. While converting trust and reputation into revenue in a new market takes time, mid-size economies can be quicker to crack than their larger counterparts.

“In addition to having strong growth potential, the three countries we’ve identified – Colombia, Poland and Vietnam – have all shown themselves to be open to foreign businesses and investors through a range of trade agreements, liberal foreign direct investment (FDI) regimes, tax reforms and government initiatives to reform aspects of their economy.”

Vietnam is looked on quite favourably as is using foreign direct investment (FDI) to move its economy to a more high-value added focus. It recently agreed a new free trade agreement with the EU and it is the country’s strong macroeconomic fundamentals and outward-looking approach, the report says, that will support growth in the country and for the businesses that invest there.

Poland is unique in that it managed to escape relatively unscathed from the 2008 financial crisis, particularly when compared with other countries in the EU. The OECD estimates that Poland has a more liberal FDI regime compared to the likes of Australia and Canada, as well as relatively low labour costs in part due to its low minimum wage. It is expected the Polish economy will grow by 16 percent in volume terms over the next five years. 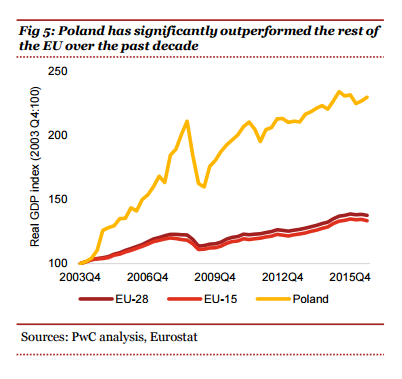 Poland has been outperforming the rest of the EU (via PwC)

In Latin America, Columbia is considered the continent’s new growth star. The country’s government has pledged to spend $70bn on infrastructure up to 2035, as a way to improve connectivity with better roads and highways. This will help support demand in the country. In addition, PwC suggests Columbia could be the fastest-growing Latin American country in its World in 2050 analysis.

Despite the tighter US monetary policy that was introduced recently, PwC believes these emerging economies are in a better position to handle the impact of a further rise in US interest rates. This is down to the way the Fed has signalled a slow and measured rate rise, which will give businesses in emerging markets more time to manage their foreign debt strategy. As well, most emerging markets have flexible exchange rate regimes, meaning they are less exposed to the payment crisis which formed the Asian financial crisis back in 1997.

Over in the UK, data for the last quarter of 2016 revealed the country’s employment hit an all-time high of 74.6 percent, in particular driven by the record numbers of working women. 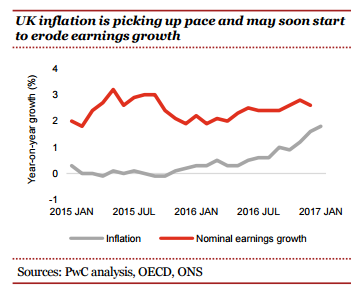 UK inflation may soon start to erode earnings (via PwC)