Business financing startups are having a moment. New businesses aimed at solving corporate chieftains’ procurement migraines and cash flow woes are increasingly grabbing headlines. The latest fintech to do so is Billie, a German startup that’s taking the highly successful shopping experience of the likes of Klarna and adapting it for businesses.

Billie solidified its reputation as an alternative to traditional business lenders in October by not only partnering up with Klarna, but also seeing its accounts topped up by the Swedish buy-now-pay-later (BNPL) giant in a $100m Series C round in the same month. B2B BNPL business Billie is now valued at $640m and is gearing up to take on the rest of Europe.

This has been a long time coming. Billie’s founders launched the company in 2016 after leaving British Funding Circle in a rumoured dispute between themselves and the UK fintech’s leadership.

Matthias Knecht, co-founder and co-CEO of Billie, and his team had joined Funding Circle in October 2015 after the British firm acquired their small- and medium-sized enterprise (SME) finance startup Zencap.

While there had been a sense of mission alignment when the deal had first been signed, Knecht tells Verdict that “fundamental differences” in the vision for the company’s future caused friction between the two teams. Then, in September 2016, Knecht, Aiga Senftleben and Christian Grobe as well as four others left Funding Circle to start what would become Billie.

“I think friendly is a very flexible term,” Knecht says when asked whether the team left on friendly terms. “I don’t want to comment on any of the specifics or details, but from my very own perspective, leaving your baby behind is always a big step for a founder and entrepreneur.”

Knecht quickly adds that the “Funding Circle team was and is a very strong team” and that he has nothing but good things to say about Lisa Jacobs, who took over as CEO after Funding Circle founder Samir Desai stepped down into a non-executive director role in September 2021.

But no matter how good the team was, the “substantial differences” between the Zencap and Funding Circle camps saw the former exit with the aim to launch a new venture.

Since then, Billie has made a name for itself by taking the consumer-centric payment options pioneered by the likes of Klarna and giving it to businesses.

Getting to this point has meant a lot of hard work. The Billie CEO particularly remembers how the startup raised its $3.7m seed round from a number of angel investors just months after leaving Funding Circle.

“At this point there was nothing, just a pitch deck,” he recalls. “No real company. We had just finished a bunch of working contracts. We were fewer than 10 people and our investors were literally investing in a 40-page pitch deck on nothing else – no licence, no financing, no product, no system. There was not even the final name Billie back in those days.”

The founders based the new startup on their experience with Zencap, which had offered SMEs instalment loans of up to €250,000, which could last up to five years. “But this didn’t cut it for many of them,” Knecht recalls.

They’d realised that many small businesses didn’t need those big loans to buy expensive things like heavy machinery. Sometimes, all they needed was the ability to keep they staff paid for the next month or to stock up their warehouses for Christmas.

They also knew that they needed to provide a way for business leaders to more easily manage their payables and receivables.

“We started to learn that there was more we could do to help businesses out there than just giving them an instalment loan product,” he says.

Looking at the consumer market, they noted how BNPL providers like Klarna and Afterpay had already been providing a similar service for years. “None of this had happened on the B2B side,” Knecht says.

He and his team decided to do something about it with their new company.

Despite having an idea of what they wanted to do, they still hadn’t decided on a name. Internally, they referred to the startup as Bill Box, an homage to the American business financing venture Fundbox, which the team was “big fans of”.

Nevertheless, in the end they needed a real name. After several discussions, the founders landed on Billie.

“It is the essence of what we’re doing because we are handling invoices and bills,” the Billie CEO says. “Even if we package it as a buy-now-pay-later product – which is incredibly sexy and smooth at the frontend and UX-optimised at the backend – you’re handling claims of one party against another in all the different shapes and forms that it can take.”

Naming the fintech Billie also provided the team with the opportunity to give the startup a sense of having a personality, a brand that could tell relatable stories.

The only setback was that there is also a New York-based razor company of the same name, which has seen a lot of confusion from prospective clients searching for one company only to land on the other’s website. The wellness business was founded in 2017 around the time Billie, the fintech, got its new name.

“I’m not sure if they were around back then or if we just didn’t do our research,” Knecht says. “We were confused quite a couple of times and we made a lot of jokes about it internally. If we officially merged with them [we’d] have a very diversified product portfolio.”

Finding a name wasn’t the only challenge the Billie CEO and his team solved in those first months. Another obstacle they overcame was getting a licence to operate independently.

“We didn’t want to use a fronting bank or some other third party who’d span their regulatory umbrella above us,” he says. “We literally wanted to do this stuff ourselves. Having the licence meant we could build it as we liked.

“Back in the Funding Circle days, we had worked with a partner bank who had the licence and we were basically renting the licence from this partner. It’s okay to do that, but it introduces friction on your company cause you’re not managing everything.”

The Billie CEO explains that to avoid being at the mercy of someone else, the startup pushed through the application process within 90 days of its launch. 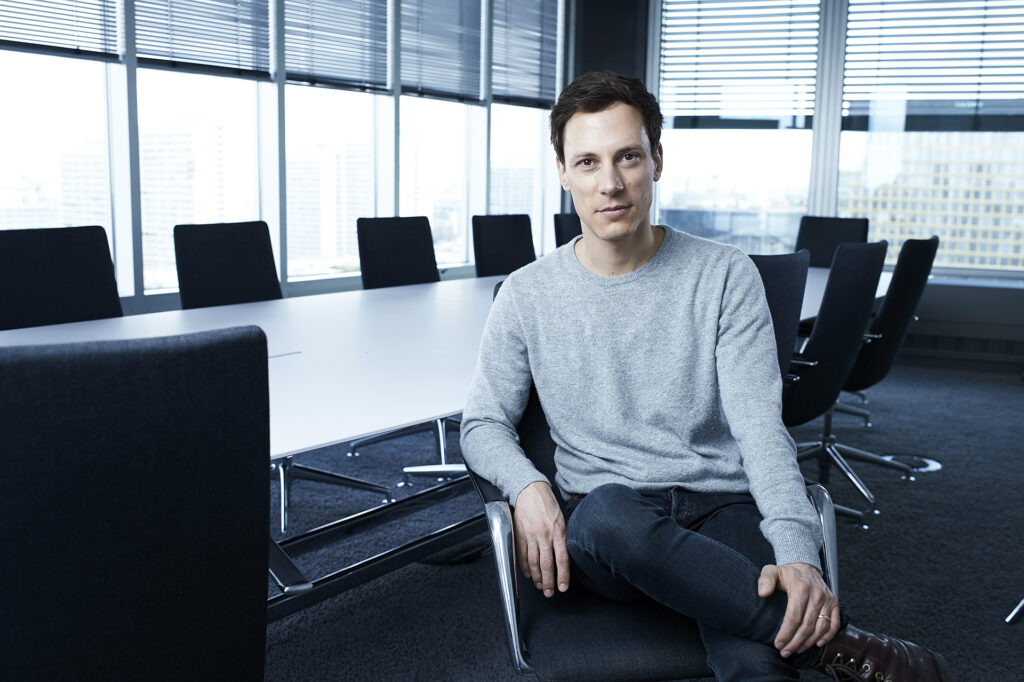 Billie CEO on creating a product fit for the 21st century

A brand, no matter how great, nor licence even, are enough on their own to grow a company: you must also have a great product to offer. Creating a product that made sense to Billie’s prospective customers was the next item on the founders’ to-do list.

“That is, of course, something that’s more easily said than done,” Knecht says, adding that the business wanted to create a highly automated product that did away with time-consuming manual labour.

“We wanted to build a system for the 21st century,” he says. “So building fully automated processes that are highly scalable across hundreds of thousands of invoices.”

That meant developing a system SMEs wanted to use that empowered them to manage risk, payments, bank integrations and data. “Bringing it to life was a big challenge,” the Billie CEO says.

But in the early summer of 2017, the company was ready and launched its first product.

Since the launch, Billie has grown at a steady pace. Picking up a $11.79m Series A round in December 2017 and a $33.79m Series B round in July 2019, according to GlobaData‘s intelligence centre. With the $100m Series C round from October, the company has raised close to $150m in total.

“What we’ve done is we’ve put a lot of important building blocks in place to build a massive company that is changing B2B payments across Europe and, hopefully soon, across the world,” Knecht says.

Klarna backing Billie will play a huge role in the startup’s global ambitions. Not only did it back the cash injection announced in October, but the Swedish quadradecorn has also inked a partnership with Billie to integrate its services for its customers. “It’s a game-changer for us,” Knecht says.

The partnership will first be rolled out in Germany at the beginning of 2022 and then in subsequent European countries.

B2B fintech space is heating up

Fintech is changing. The industry used to focus on consumer-facing products. The past few years have seen more players in the market adopt the lessons learned from the commercial market to the corporate side.

“We are at an inflection point where many of the transformational changes we’ve seen taking place in B2C are now coming over to B2B and that’s where we want to play the key role across Europe and then the world,” Knecht says.

Billie is not alone in hoping to ride that wave. A new breed of business-focused fintechs have emerged who are adopting the BNPL model from companies like Klarna and Afterpay and putting it towards helping corporates access smooth lines of credit.

B2B-focused BNPL businesses include Amsterdam-based Biller, which was launched earlier this year by former Klarna and Mollie executives.

Other rivals include Affirm spinout Resolve, ePayLater and Tillit.

The Billie CEO plans to leverage the money from the latest funding round to position itself against its competitors in two ways. Firstly, through the previously mentioned international expansion of the company and, secondly, by building and scaling the Billie platform.

“We’re just at the beginning of using this incredible funding to build an amazingly large company,” Knecht concludes.