The bitcoin price has once again crossed into uncharted territory, reaching over $2,900 dollars per coin according to price site Bitcoinity.

Bitcoin is now up a whopping 200 percent in 2017 alone, adding to fears the latest surge is a bubble that’s sure to burst any day now.

Much of the latest bitcoin action is being driven by demand and trading volume coming out of east Asia, specifically China and Japan.

According to bitcoin news site NewsBTC:

Japan has shown a growing appetite for Bitcoin. More specifically, local exchanges are generating increasing amounts of 24-hour volume. bitFlyer, for example, processed $41.27m of trades over the past 24 hours.

This appetite for bitcoin is a result of Japan declaring the currency legal tender back in April and volumes have been increasing since.

Meanwhile, this week saw bitcoin exchanges in China again allowing withdrawals of the virtual currency, having upgraded their systems in response to heightened government scrutiny.

The lifting of sanctions ends a three-month moratorium that began shortly after regulators launched an investigation into the exchanges.

They also threatened to shut down ones that didn’t comply with authorities concerned bitcoin could be used to bet on a decline in the Chinese currency or stock market, something that is closely controlled by the government.

OKCoin.cn is the leading Chinese platform, followed very closely by BTCC and Huobi.

These exchanges would appear to be inflating the price themselves with the price some $100 ahead of the US exchanges at any given time.

When will this latest bubble burst?

It’s hard to deny bitcoin is in a bubble right now. Even if you think the price could continue to rise in the long term, this kind of rapid price rise is impossible to sustain and will ultimately result in a correction.

But the question is when.

Looking back at previous bitcoin surges and sell offs it would appear this one has some way to run.

However there is certainly less media attention fuelling the boom so it could well collapse earlier than the 2014 crash.

The big unknown for bitcoin remains the US Securities and Exchange Commission decision to reject two bitcoin exchange-traded funds. While it has now asked for public comment on its decision on the Winklevoss twins ETF it has made no further ruling or statement.

The decision did little to dent the bitcoin price at the time, but a sustained anti-bitcoin agenda from the commission would do no favours to the price outlook.

In the chart below the red arrow is where we are now and the blue arrow points to the 2014 boom and bust. 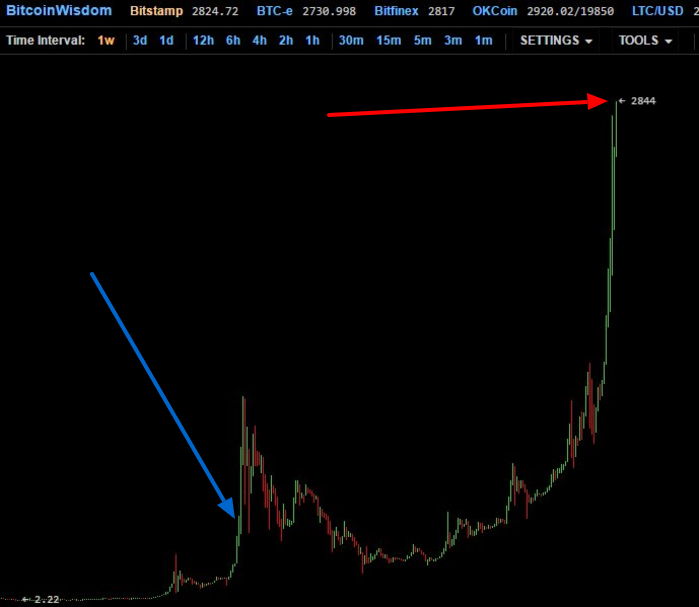 Topics in this article: Bitcoin, Japan