Showers pour down on Sao Paulo as it prepares for its annual Formula One event, but what are the chances of a downpour during Sunday’s main event and what would it mean for the season’s penultimate race?

You would expect rain at the British Grand Prix and cold spells during the Canadian and Austrian events, but not so much in Brazil, where the temperature rarely falls below 20 degrees Celsius during the day.

However, the Brazil Grand Prix falls during November, right in the middle of Sao Paulo’s rainy season. Habitual rain is expected between October and March and thunderstorms can never be ruled out.

Should rain fall on Sunday, it wouldn’t be the first time that the race has been effected by the weather. Drivers have had to race around a wet track on several occasions since the event returned to the city in 1990.

Last year’s event was one of the worst for Brazil Grand Prix weather. With his vision blurred by spray, Lewis Hamilton won a race that saw the safety car deployed five times to deal with four accidents and an electrical malfunction. 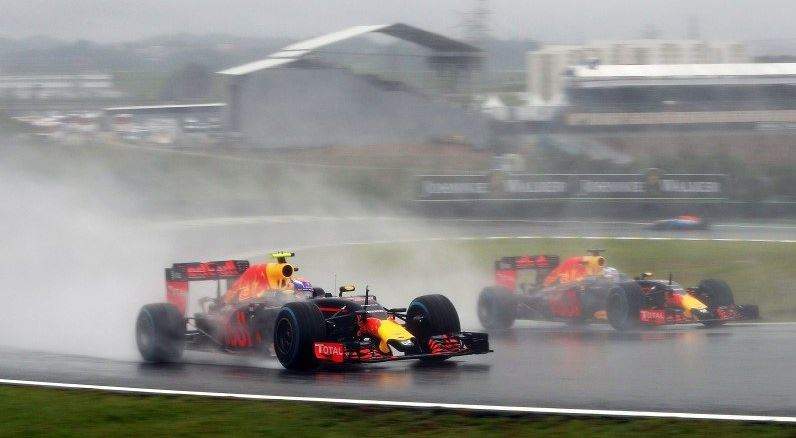 Despite some light rain on Sunday, all has been calm and temperatures have sat in the high 20s.

However, as the event draws closer, forecasts have predicted heavy rain. According to BBC Weather, Sao Paulo will be hit by thunderstorms and showers starting on Thursday, 9 November. This will continue until Saturday, 11 November.

It seems that the elements have got the memo, as clear skies and warm weather is predicted for the main race on Sunday. However, that could always change. Likewise, following three days of heavy rainfall, there may still be water on the track heading into the Brazilian Grand Prix.

What would rain mean for the Brazilian Grand Prix 2017?

Built on marshland between the Guarapiranga and Represa Billings lakes, the ground surrounding the track tends to get waterlogged quickly. As a result, water sits on the track providing a tricky and often dangerous surface to race on. As a result, if anything, bad weather will only intensify the action and provide more entertainment for spectators.

Mercedes has already clinched the F1 Constructors’ Championship and Lewis Hamilton confirmed his fourth world championship victory with a ninth place finish at the Mexican Grand Prix. Therefore, there isn’t a whole lot to play for in Sao Paulo.

However, the wet weather does provide opportunities for less competitive racers to claim a rare victory.

Some drivers thrive in tricky conditions, which could provide something a little different following a season that has been dominated by the same big names.

For example, Force India’s Sergio Pérez appeared destined to clinch a place on the podium at last year’s race. Despite falling to fourth, he was able to finish ahead of the likes of Daniel Ricciardo and Sebastian Vettel.

Pérez’s Force India teammate Esteban Ocon is hoping to pull off a similar feat this weekend:

“Interlagos is definitely one of my favourite tracks on the calendar. I drove there for the first time last year and had a very strong race in the rain. I enjoyed driving in the wet last year and would be happy if it rains again.”

Regardless of the Brazil Grand Prix weather conditions, the race will take place on Sunday, 12 November. Drivers will set off on the first of 71 laps at 4pm London time.