Sterling had an annus horribilis in 2016, but so far 2017 has heralded something of a comeback.

In the first quarter of 2017, sterling rose 1.56 percent against the US dollar. Despite falling initially on UK GDP data, which showed consumers borrowing more — and continued to grow in February — it soon regained momentum on the back of a rough halving of the UK’s huge current account deficit.

In the previous six quarters the pound has recorded losses totalling 23.6 percent.

The last time it enjoyed gains in the three months to June 2015 of 5.94 percent.

Will this unexpected bounce last?

Is a hard Brexit now a hard fact?

We thought so before, but now that’s in doubt again.

May said in a speech in January the UK “cannot possibly” remain within the European single market, as staying in it would mean “not leaving the EU at all”.

But why is a hard Brexit — which means the UK leaving the single market — a bad thing for the pound?

Well, on that day it wasn’t. The pound saw its best day’s gain in more than eight years against the dollar following May’s speech, pushed on by rising inflation and the a positive reaction to the speech. 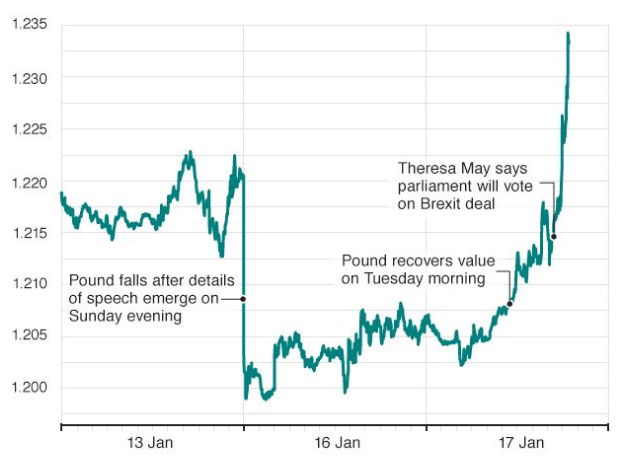 According to Thomson Reuters data, the pound had its best day’s gain against a basket of major currencies since 1998.

This was due to details of May’s speech leaking on Sunday evening, then climbing on some of the details that had been kept back. Investors and traders also reacted well to May’s tone and confidence.

What has the 2017 general election announcement meant for the pound?

Theresa May’s surprise general election announcement sparked a surge in the pound — though the FTSE’s blue-chip shares suffered their biggest one-day decline since the country voted to leave the EU.

The pound climbed as much as 2.7 percent to a five-month high of $1.2905 yesterday, as investors bet the prime minister would use the vote to neutralise Tory Eurosceptics and deliver a soft Brexit.

The rally led the pound to break through the closely watched 200-day moving average, which points investors towards a potential upwards shift in the currency.

Moving averages are widely followed measures of momentum that investors use to track price trends over various durations.