San Francisco has become the first city in the US to ban the sale of flavoured tobacco products, including menthol cigarettes.

The city’s board of supervisors has passed the legislation proposed by San Francisco’s 10th district supervisor Malia Cohen.

Today, the BOS unanimously approved my legislation to ban the sale of flavored tobacco in San Francisco. #FocusOnFlavors #DoItForTheKids pic.twitter.com/rmNaOnVVhG

Supervisor Cohen in a statement:

Today, San Francisco sent a clear message that we need to do more to protect the health of our most vulnerable. The tobacco industry’s bottom line can only be maintained by consistently cultivating new users.

Cohen said the legislation will help ease the $380m San Francisco loses annually from the damage wrought by tobacco use.

What we are seeing is truly candy-flavoured tobacco.

Through a combination of aggressive marketing and enticing flavours a new generation of vulnerable youth and minorities are being ushered in as older generations drop off.

A history of independent studies appears to bear out this idea.

These are some #flavoredtobacco products purchased in stores across our city. We don't want these sold in #SF #FocusOnFlavors #StopProfiling pic.twitter.com/NZatm1capA

Commenting on the ban, Matthew Myers, president of the campaign for Tobacco-Free Kids, said in a statement:

As youth smoking rates have fallen, manufacturers have sought to entice kids with a new generation of flavored tobacco products. Electronic cigarettes are sold in over 7,700 flavors, and flavoured cigars make up more than half of the US cigar market. These products come in flavors like gummy bear, cherry crush and banana smash that clearly appeal to kids.

A 2016 report from the Centers for Disease Control and Prevention (CDC) on youth e-cigarette use found e-cigarette companies had increased their advertising spending nearly 20-fold over three years, from $6.4m in 2011 to $115m in 2014.

Around 69 percent of middle and high school students in the US were exposed to this advertising, and the report also noted that e-cigarette advertising adopted many of the themes commonly pitched at teenagers “including sex, independence, and rebellion”.

And it appeared to work.

As with sweet alco-pop type drinks which mask the taste of alcohol, researchers have found flavoured tobacco products help kids get into smoking by masking the taste of tobacco.

According to a 2015 report in the American peer-reviewed Journal of the American Medical Association, a survey of 13,651 12 to 17 year-olds showed “the majority who self-reported ever experimenting with tobacco started with a flavoured product”.

Of the youths who had experimented with e-cigarettes 81 percent had started with a flavoured brand.

Perhaps most notably, tobacco companies have deliberately flavoured their products with the same ingredients as popular candy brands. A 2014 report in the New England journal of medicine documented this.

The same, familiar, chemical-specific flavor sensory cues that are associated with fruit flavors in popular candy and drink products are being exploited in the engineered designs of flavored tobacco products. What we are seeing is truly candy-flavoured tobacco. 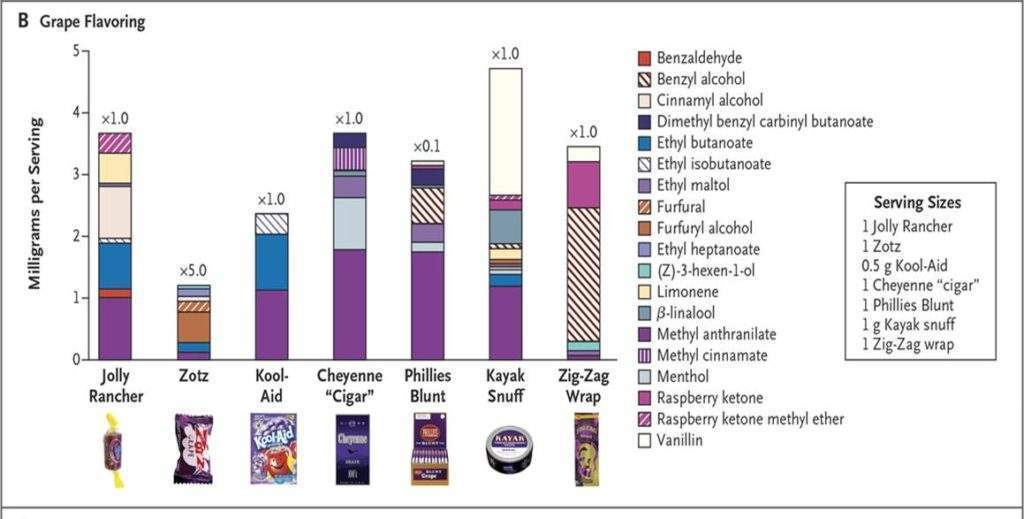 These flavoured products are undermining the nation’s overall efforts to reduce youth tobacco use and (are) putting a new generation of kids at risk of nicotine addiction and the serious health harms that result from tobacco use.

A 2016 report in Tobacco Control found that use of menthol-flavoured tobacco products accounted for 86% of African American smokers aged 12 and up compared to just 25 percent among white smokers and 37 percent of smokers of Hispanic origin.

According to the CDC the tobacco industry have deliberately tailored their marketing for menthol tobacco products to the African American community.

The industry has done this by emphasising the aspirations it ascribes to black people in the US including fantasy and escapism, expensive objects and nightlife as well as entertainment and music themes.

The majority of these campaigns featured black celebrities or models.

Though a 2011 report in the International Journal of Environmental Research and Public Health found African American smokers were less likely to have used e-cigarettes than white smokers (50 percent compared to around 71 percent) the report showed black users were much more likely to continue using the products (70 percent to 53 percent).

“We salute the vision and courage of Supervisor Malia Cohen,” said Carol McGruder of the AATCLC when the legislation was first announced. MacGruder called for the “greater tobacco control community to work strategically to restrict the sale of menthol cigarettes and other flavored tobacco products”.

Big Tobacco and the LGBTQ community have had a complicated relationship over the decades, especially in San Francisco.

In 2000 a marketing campaign by RJ Reynolds Tobacco was leaked to the press with the improbable name of Project SCUM (Subculture Urban Marketing). It outlined plans to market tobacco to young gay men in the Castro neighbourhood of San Francisco as well as the city’s homeless.

“This is a hate crime, plain and simple,” Kathleen DeBold, director of the Mautner Project for Lesbians With Cancer told the SF Weekly at the time. “What else do you call it when a group thinks of gays and lesbians as ‘scum’, and then targets us with something that kills?”

They weren’t the only ones.

In 1994 a leaked Philip Morris document showed the company’s overtures to the gay community embodied in their iconic Marlboro Man.

Among gay consumers, this image has particular importance as an overt cue to masculinity/sexuality. Marlboro’s success in this context depends wholly on the relevance of this cowboy image to the world (fantasy and real) of these gay consumers.

Today the industry markets itself towards the LGBTQ community in much the same way it tries to get young African Americans smoking.

According to the CDC the industry regularly sponsors Pride events, contributes to local and national LGBT and HIV/AIDS foundations and markets tobacco as an intrinsic part of gay life.

This in part accounts for the prevalence of smoking among the LGBTQ community — typically 23.9 percent of gay, lesbian and bisexual adults smoke cigarettes compared to 16.6 percent of straight adults (not much aggregated data exists on transgender tobacco use, though one study puts it as at around 40 percent).

Some e-cigarette vendors market their products directly as a way to help the LGBT community kick its tobacco habit and the industry has been accused of “sockpuppeting” by paying LGBTQ leaders to write op-eds to the same effect, as in the case of Log Cabin Republicans exec Gregory T Angelo. 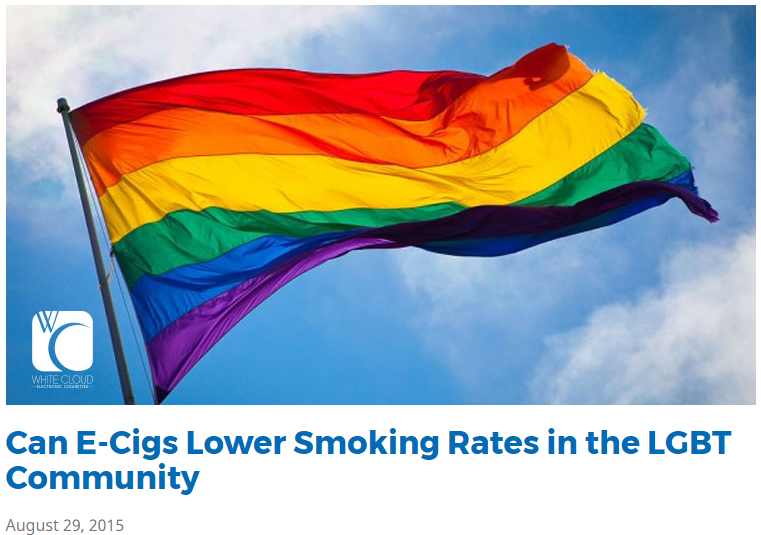 Menthol-flavour use is also higher for LGBT youth aged 12 – 17 (71 percent) than for the average teenager (48 percent), according to the Center for American Progress.

The centre asserts while tobacco companies may be discriminating in their marketing, it is also the greater social discrimination itself that incentivises minorities to smoke.

Smoking becomes a coping mechanism to help them deal with these issues — issues that are further magnified for gay and transgender people of colour who face discrimination due to both race and sexual orientation or gender identity.

In all these cases flavoured tobacco products have been marketed to vulnerable groups and minorities by appealing to attributes (or stereotypes) of the class.

Though the sale of flavoured tobacco products is still allowed everywhere else in the country, for people like supervisor Cohen and Campaign for Tobacco-Free Kids’ Myers, it’s a step in the right direction.