According to data from the International Air Transport Association (IATA), passenger traffic in China’s domestic market grew by 15.1 percent year-on-year, taking the top spot from India to become the fastest growing market.

The IATA is putting this down to robust growth in the country’s services sector and supply developments that are improving flight times for passengers as well as keeping costs down. 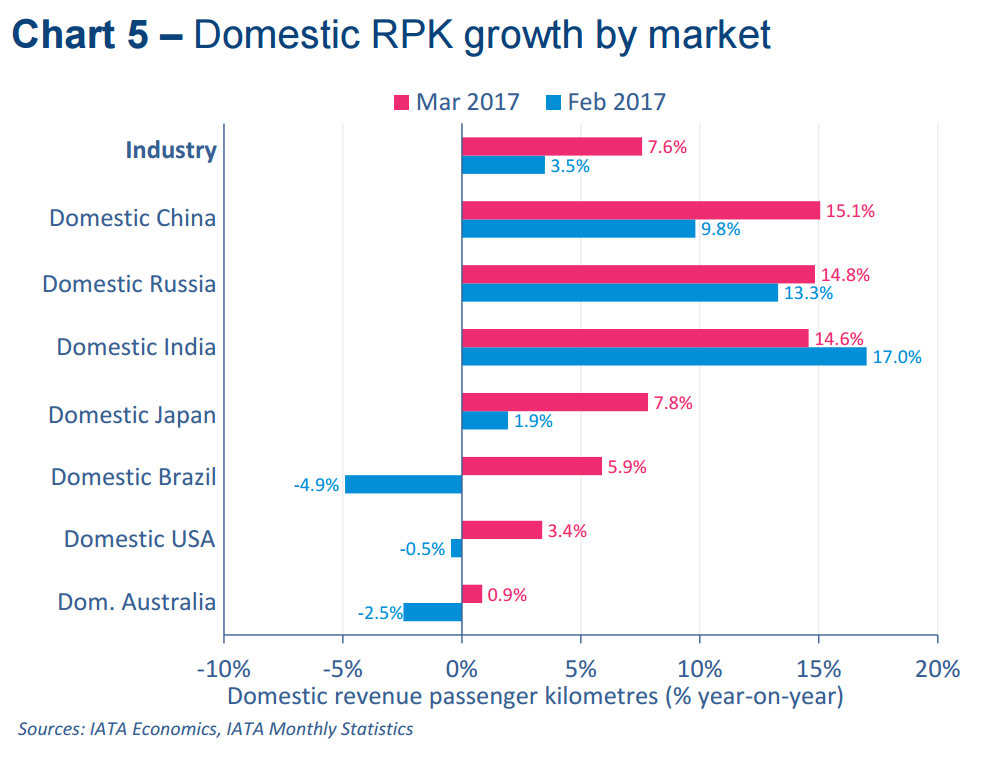 It was a difficult day for India’s domestic industry as it has grown at its slowest pace since September 2015, down to 14.6 percent. It is thought prime minister Modi’s demonetisation policy has had an impact: IATA said it could be “the first possible sign of reduced cash supply and wider economic uncertainty weighing on demand.”

According to GlobalData, forecast growth of combined domestic and international flights across China, India, and Russia suggest China’s total aviation market will be growing at almost 10 percent at the end of the decade.

Russia has had a hard battle to come back from minus growth in 2014 to reach 4.05 percent growth by 2019. IATA found that Russia’s domestic traffic has been growing in particular, thanks to improiving economic outlook in the country as oil prices have firmed.

China’s aviation industry will be beaming at this outlook, which also happened on the same day its first large domestically produced passenger jetliner made its maiden flight. The C919 passenger jet took off from Pudong International Airport, Shanghai, early on Friday 5 May, and demonstrates a major step in the country’s goal to break into the Western-dominated aircraft market.

The official Xinhua News Agency said the country had become “one of the world’s top makers of jumbo aircraft”, taking fourth place behind the US, Europe and Russia.

The aircraft’s maker, the state-owned Commercial Aircraft Corp. of China, also known as Comac, said more than 200 Chinese companies and 36 universities had been involved in the research and development of the aircraft. It is being positioned as a rival to jets such as the Airbus A320 and Boeing 737, with Comac saying it has 570 orders, mainly from state-owned Chinese Airlines and a few foreign customers such as Thailand’s City Airways.

However, despite Comac touting the jet as Chinese-made, it still relies on foreign-made technology for critical systems such as its engines. These were made by CFM international, a joint venture between General Electric’s aviation subsidiary and the French-based Safran Aircraft Engines. The first delivery of Chinese-developed engines isn’t expected until 2020, according to AVIC Commercial Aircraft Engine Co, the company making them.