Contactless cards have already taken off in some European countries.

In Poland 78 percent of all payment cards were contactless at the end of 2016 and by the beginning of 2017 61 percent of cards in the UK could be used contactlessly.

Over the next few years, other European markets are expected to follow suit.

However, contactless card adoption has varied depending both on how early contactless roll out began and on the level of engagement from banks, card schemes, and retailers. 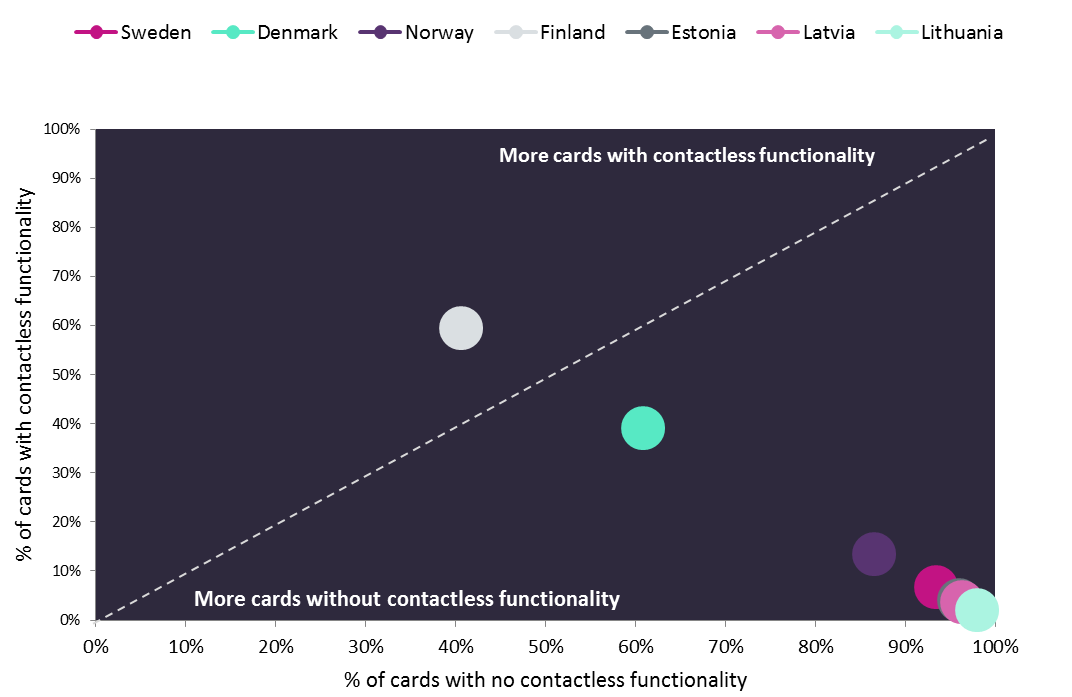 Finland, the most developed contactless market, was also the first market in the region to roll them out, starting in 2012.

By contrast, Estonia, Latvia, and Lithuania, which are the weakest markets by contactless card penetration, began roll out just last year.

However, the success of contactless within a market is not solely measured by the number of cards produced.

Finland’s contactless market may be strong but the Bank of Finland has said uptake has been slow over the five years it’s been on offer and is only now ramping up.

In Denmark, contactless card issuing began in 2015 but did not pick up momentum until 2016, when national scheme Dankort launched a card-reissuing campaign, supported by the large banks and retailers in the market.

Both Denmark and Norway have dominant national schemes in place – Dankort in Denmark and BankAxept in Norway.

In 2016, fewer than 20 percent of cards in Norway had contactless functionality and very few point of sale terminals were enabled due to BankAxept’s (and the Norwegian banks’) lack of support for the technology.

However, contactless will take off in Norway this year due to a deal between BankAxept and Canada’s Interac to supply the tech.

Banks play an important role in creating a strong contactless card market, but retailer buy-in is necessary too if the cards are to be used.

In 2015, ICA Banken (a mid-sized bank owned by a major supermarket chain in Sweden) started issuing contactless cards and at the same time it turned on its in store contactless terminals.

There were about 7m contactless transactions in less than a year when only 400,000 customers even had a card.