For the first time in history, less than half of US households now have a landline, according to a bi-annual study published by the US government on Thursday.

The Centers for Disease Control and Prevention (CDC) found that 50.8 percent of almost 20,000 homes surveyed across the US had at least one mobile phone but no landline.

Just over three percent of homes surveyed had neither a mobile phone nor a landline.

Those surveyed who did have a landline said they did so for a variety of reasons including in case of an emergency or to call older relatives.

In 2003, the CDC first started to ask participating households whether they had “at least one phone inside [the] home that is currently working and is not a cell phone.” 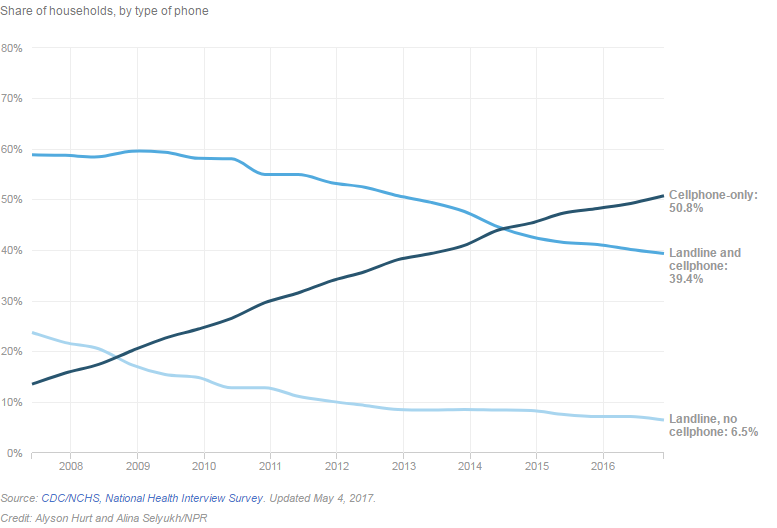 Major US telecommunications providers including Verizon and AT&T are representative of the trend towards mobile-only.

Their revenue from landline phones has dropped, while demand for wireless handsets has jumped up.

Which groups are more likely to use mobile phones rather than landlines?

Renters and younger adults are more likely to live in a mobile-only household; they tend to be on the move more often and find it easier to use newer technology, according to researchers.

He goes as far as to suggest that people who live in mobile-only households are more reckless.

“Wireless-only adults are more likely to drink heavily, more likely to smoke and be uninsured,” even after factoring for age and income, said Blumberg, who is a landline user himself. “There certainly is something about giving up a landline that appeals to the same people who may engage in risky behavior.”

Are households in the UK also mostly mobile-only?

In the UK, the proportion of mobile-only households is much lower.

Data from Ofcom, the UK telecoms and communications watchdog, shows that at the start of 2017, just 18 percent of UK households were mobile-only.

There has been a steady decline in the quantity of calls made and received via a landline, however most homes in the UK still need a landline in order to get fixed line broadband.

In the US, households can get their broadband and TV via a cable provider instead, so a traditional phone line is unnecessary.

“I’m not too surprised with the numbers coming out of the US if you consider the market dynamics. Cable penetration in the US is higher than in other markets such as the UK, and with cable a landline is not needed for you to take broadband,” Matthew Howett, an independent telecoms analyst told Verdict.

“If you look to most other countries I’m sure you will see a similar trend with people making and receiving fewer calls using a fixed line in favour of mobile. The fixed line phone may still be there in the hallway, but fewer people are making use of it,” he added.