Article 50 has been formally triggered.

European Council president Donald Tusk tweeted to say he received the formal notification that the UK is leaving the European Union.

After nine months the UK has delivered. #Brexit

He then tweeted a picture of Tim Barrow, the UK’s permanent representative in Brussels, handing him the formal letter. 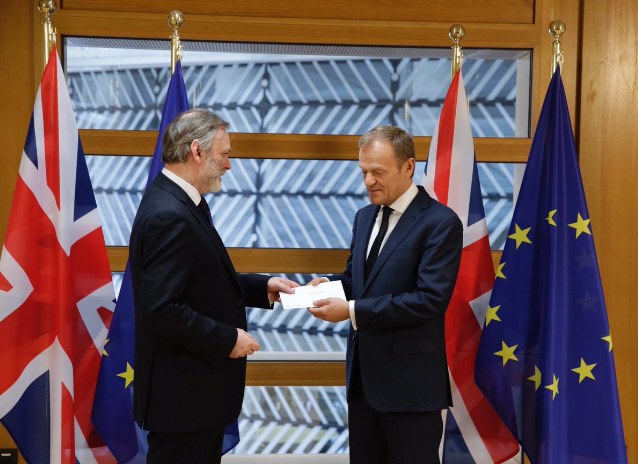 Last week, Downing Street confirmed the date, saying the UK prime minister Theresa May will announce the start of the formal process for Britain to leave the EU before her self appointed deadline of the end of March.

Brexit secretary, David Davis has said it will be “the most important negotiation for this country in a generation”.

How does the process start?

For May to formally trigger Article 50, she will have to send a letter to the European Union (EU) to announce the intentions.

This means that the UK will officially cease to be a member of the EU in exactly two years on 29 March 2019.

Donald Tusk, EU council president has said the EU will issue a formal response and broad guidelines within 48 hours, so we should expect to see this by Friday.

What happens during the two-year period?

The UK will spend its time negotiating with the EU over the official Brexit. Some suspect the negotiations could take longer yet according to Article 50, this needs to be tied up before the end of the two years.

With negotiations about future EU-UK trade relations expected to take longer than the two years available, it is likely that an interim agreement will have to be struck, and we do not expect full independence to be secured until the 2020s at the earliest.”

During this time the UK will still be bound by EU laws and regulations. As well, it will have near-full membership rights and must honour its financial and other commitments as a member.

Will the UK have to pay to leave the union?

The European Commission president Jean-Claude Juncker said in a recent interview that the UK’s expected Brexit bill could be around £50bn.

Juncker told the BBC that though the EU doesn’t want to punish Britain for Brexit, it needs to deter other countries from following suit.

British ministers, such as Liam Fox, have disputed that the UK is liable for such a sum. However, unless there is progress on this issue, other discussions could be stalled.

Elsewhere in the EU, it is thought that the negative effects for Britain should be limited once Brexit occurs.

Germany’s finance minister Wolfgang Schaeuble told the German radio station Deutschlandfunk that the EU wants to keep the disadvantages as small as possible.

“We need to find a fair path – if Britain still wants to have good access to the single market, it has to take on the corresponding commitments and if it doesn’t want that, then there will be a separation – that’s a shame for Britain,” said Schaeuble.

What will happen to EU laws in the UK?

Several aspects of EU law make up legislation in the UK. As a result, it is thought around 10 to 15 new bills and thousands of pages of secondary legislation are needed before the Article 50 process is complete.

The Institute of Government (IFG) published an 18-page report examining the “huge burden” Brexit places on lawmakers and government departments.

Hannah White, IFG’s director of research, said in a statement:

“The legislation required for Brexit will leave little parliamentary time for anything else — and making a success of it will require a large volume of bills and secondary legislation to be passed by Parliament against a hard deadline.”

Get the latest reaction here