In an era when technology takes the blame for many of the world’s woes, Michael Dell made no apologies for being a technology optimist at Dell Technologies World, striding to centre stage to deliver his keynote to the strains of We Will Rock You.

“This is a time of unprecedented progress, and it’s an opportunity for all of us to have an impact in our businesses, driving new digital-native models and products and services, in serving our customers, solving their problems and building a better world,” he said.

“Technology is the enabler of progress in every area of our organisation, and in this way it is far beyond what used to be an IT organisation, and I believe this will only increase. Every business, every organisation, every government, every healthcare organisation needs to re-imagine itself in this new digital age. We’ve invested more than $20bn in R&D in the last five years, with 20,000 scientists, engineers and PhDs enabling your digital future.”

Dell Technologies World brought together technology innovators from around the world under the theme of technology optimism in the glamorous surroundings of Las Vegas last week. Here are some standout take-home observations from the three days of the event.

It boasted 15,000 attendees – equivalent to the population of a small town – from 122 different countries and 400 Dell partner organisations. 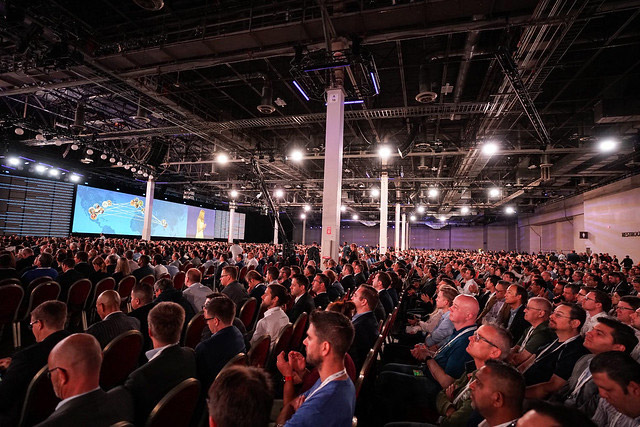 The conference was attended by 15,000 people.

The cloud should be seamless

The hardware behind it is Dell EMC’s VxRail, the industry’s first fully integrated, pre-configured, and pre-tested VMware hyper-converged system.

Speaking of VMware, the CEOs of Microsoft, VMware and Dell – Satya Nadella, Pat Gelsinger and Michael Dell – came together on stage to announce a collaboration to deliver a fully native, supported, and certified VMware Cloud infrastructure on Microsoft Azure.

Customers who use both Microsoft 365 and VMware Workspace ONE will be able to manage Office 365 across devices via Cloud-based integration with Microsoft Intune and Azure Active Directory.

Gelsinger said: “Customers are excited to see us expand our collaboration with Microsoft. These innovative Cloud and client offerings will deliver customers even more value, provide more flexibility to accelerate their hybrid multi-Cloud and multi-device journey, and accelerate the digital transformation of their business.”

Michael Dell is hugely popular among his employees and customers

In an era when many technology CEOs have courted personal publicity and fallen from grace, Dell, who literally puts his name on his products, lets his technology speak for itself.

While an engaging public speaker and happy to pose for selfies, he has earned a loyal fanbase among his employees and customers, among whom his presence is whispered in hushed tones. 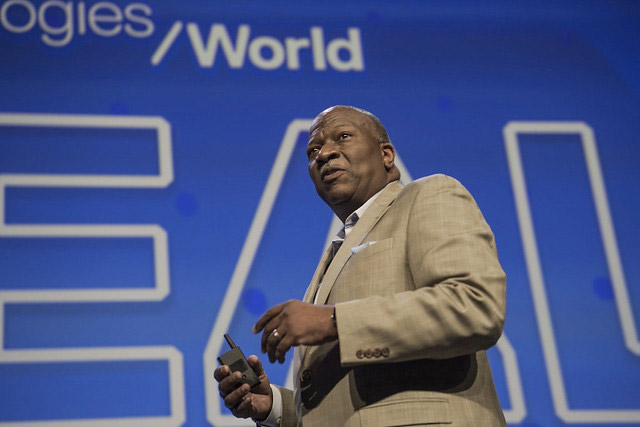 “Diversity started as my side hustle, enabling people with different backgrounds to have similar opportunities,” he said. “Now, reporting directly to the CEO makes it a business imperative.”

Dell’s inclusivity programmes include Dell Career Restart for people who have left the workplace for a long period, Many Advocating Real Change  (MARC) working to change bias in the workplace, and the Reboot Representation Tech Coalition, aiming to double the number of women of colour graduating with IT degrees by 2025. 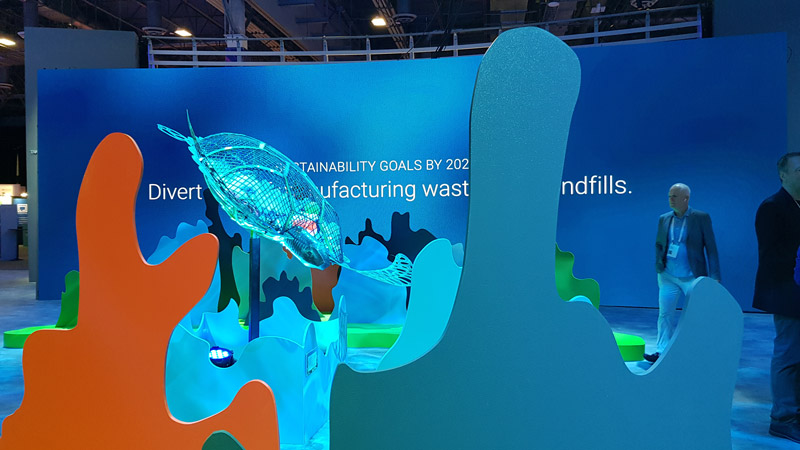 Dell has a strong commitment to reducing its environmental impact

The company prints packaging in India using black ink made from captured diesel fumes with its partner Chakr Innovations.

It uses ocean plastics collected and sorted by entrepreneurial pickers, volunteer groups and professional recycling organisations with other recycled HDPE plastics in a 1:3 ratio in its laptop packaging. It also collects plastics and precious metals from discarded technology to use in its computers.

In a panel debate on “Optimism and happiness in the digital age”, founder and CEO of I.AM+ Will.I.Am coined this neologism for people addicted to their phones. He also observed that investment in AI has exceeded the investment in what he calls HI – human intelligence. 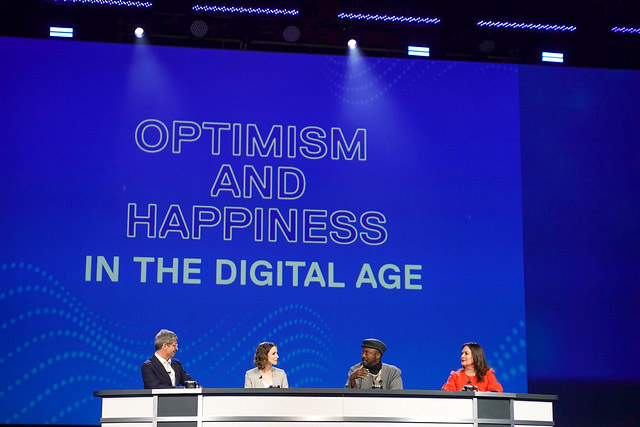 Will.i.am gives his thoughts on the changing state of technology

Nomadic working is getting growing support

Recognising that 52% of people work in three or more places on a weekly basis, the company launched Dell Technologies Unified Workspace, which combines its devices, VMware and Secureworks to enable people to work anywhere over the cloud seamlessly and securely.

According to Dell Technologies vice chairman of products and operations Jeff Clarke, it will tell organisations the specific devices and applications their workforce needs then deliver them directly to the end user, preconfigured and preloaded with all the apps and security features they need without IT having to touch the device.

For added security, it uses Dell SafeBIOS, an off-host BIOS verification capability rather than storing BIOS information on the hardware itself, which is susceptible to corruption, is that is integrated with VMware Workspace ONE, enabling IT to set up automated workflows to push over-the-air updates and restore devices to compliance.

Dell is using deep learning and machine learning to make cyber threat detection and response faster. Its information security subsidiary Secureworks announced a software-as-a-service (SAAS) application, Red Cloak Threat Detection and Response (TDR), which can detect advanced threats and reduce their volume of alerts and false. It incorporates a Counter Threat Unit that, as soon as a threat is detected at any of over 4,200 subscriber locations, makes a countermeasure available. 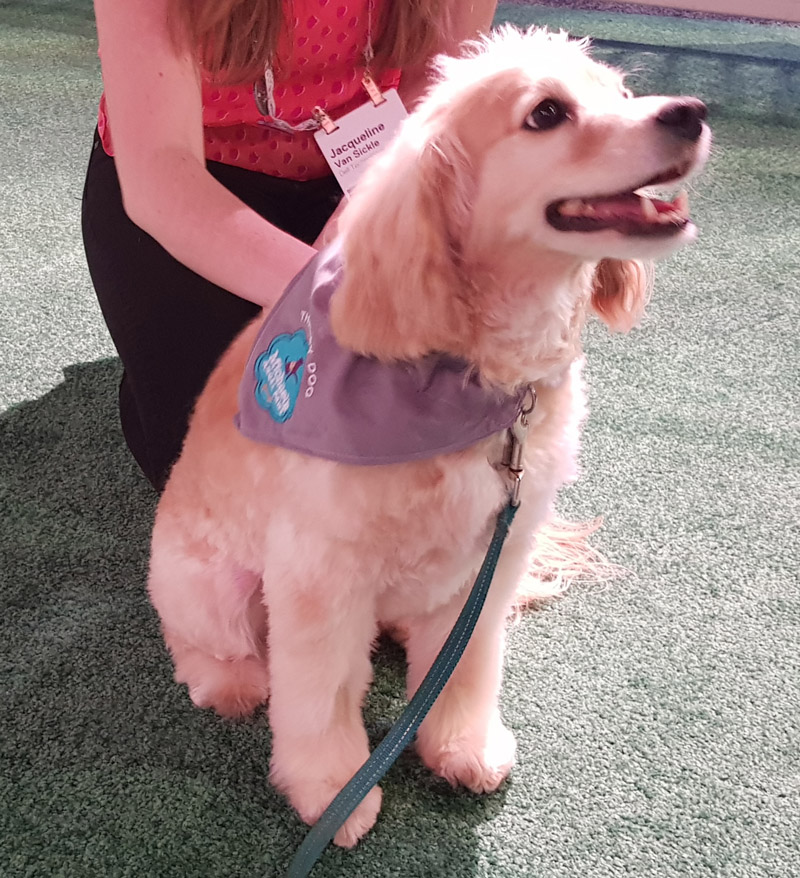 Stress-busting dogs were a key feature of the conference.

One of the most popular areas of the exhibition was the petting park where frazzled attendees were invited to hunker down with chilled canines that lapped up the attention as they eased anxiety.

Read more: The world’s largest cybersecurity conference may have grown too big for its own good