Over the first nine weeks of the year, the sales growth at Domino’s stores open for more than a year dropped to 1.5 percent, down from 10.5 percent in the same period a year earlier.

Looking forward, the UK consumer environment is more difficult,” he said. “Our research tells us that customers are worried about rising prices.”

This year, Domino’s also decided to make a change to its Winter Survival deal — a large pizza, garlic pizza bread, potato wedges and cookies all for just £14.99 ($18.22) — by omitting the cookies.

This year it didn’t go as well as expected. We made a slight change to the offer by taking a cookie, which was the dessert, away. That was part of the problem…” added Wild.

Verdict takes a look at Domino’s history and its rival Pizza Hut:

1958 It all began in Wichita, the largest city in Kansas, when brothers Frank and Dan Carney opened the world’s first Pizza Hut restaurant with a $600 loan from their mum.  Twenty-five people could sit down at a squeeze.

They chose the name “Pizza Hut” because the sign which they purchased for their restaurant only had room for nine letters.

In 1973, Pizza Hut finally made its way to the UK, with its first restaurant opening in in London’s Islington.

From 1980 onwards, an average of one restaurant was opening each week across the country.

In 1983, it became the first pizza restaurant in Australia to offer a home delivery service.

In 1990, Pizza Hut entered the Chinese market, with its first restaurant in Beijing.

The chain was also a leader in the digital world, becoming the first pizza restaurant to offer online pizza delivery in 1994.

Since then, there have been many new fillings on offer from cheese to bacon. 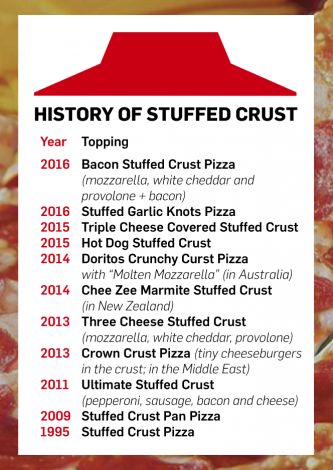 Pizza Hut even delivered pizzas to space in 2001.

In 2011, in a bid to provide healthier options, free unlimited salad bars opened in every chain for anyone who went for a meal at a Pizza Hut restaurant.

Domino’s Pizza was founded by business entrepreneur Tom Monaghan, who opened the first store in Ypsilanti, a small city in Michigan in 1960.

The chain arrived in the UK 25 years later in 1985, with its first restaurant opening in Luton, Bedfordshire.

In 1999, Domino’s clinched a TV sponsorship deal with the popular cartoon programme The Simpsons.

That year, the company also became the first home-delivery business to float on the London stock exchange’s Aim market.

By then, there were 100 Domino’s outlets.

In an effort to appeal to the more health-conscious members of the public Domino’s removed all hydrogenated fats from its products in 2007.