There have been multiple signs this week that investor interest in emerging markets is back on.

The latest is from developing markets focused investment fund Ashmore which has today reported a rise in assets under management of $2.8bn, with net inflows of $1.2bn.

This comes after the chair of the US Federal Reserve Janet Yellen told Congress in her semi-annual testimony yesterday that the Fed would continue its gradual path of rate increases amid weak inflation and is unlikely to ramp up rate rises suddenly.

That’s good news for developing markets, with stocks in these regions around the world nearing a technical level unseen in seven years.

The dollar fell back on Yellen’s comments, with greenback strength seen as a negative for emerging markets, as not only does it depress the value of their commodities, but also hikes US dollar-denominated debt.

Despite the sky high valuations of equity in emerging markets, they’re still far cheaper than in developed nations, coming with a 25 percent discount.

What’s been the EM worry?

The last few months have been particularly concerning for emerging markets, with Donald Trump’s victory in the US presidential election last November and fears he will enact protectionist measures that could drag on trade.

Meanwhile, concerns around China’s slow down and monetary tightening, persistently low oil prices, and sanctions on Russia all weighing on emerging markets. 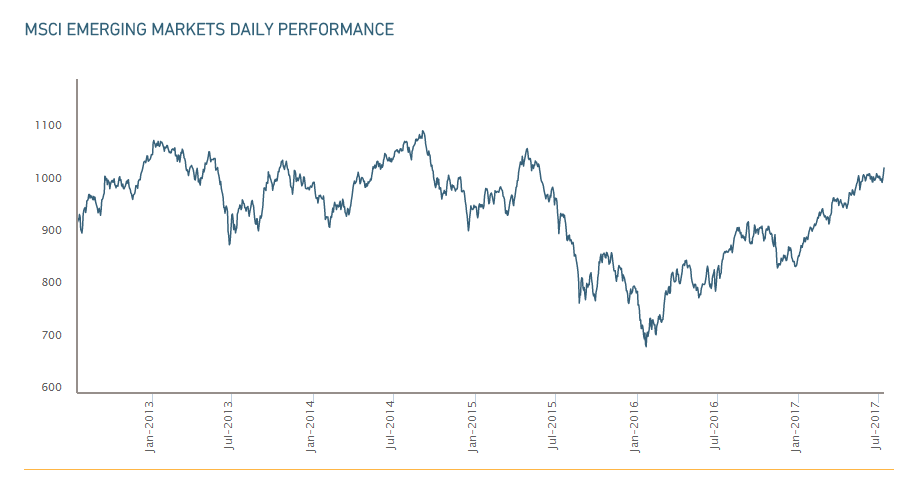 Emerging markets asset prices have started to reflect the resilient fundamentals of the underlying economies and investor activity levels are responding. Looking ahead, there is substantial absolute and relative value still available in emerging markets and investor allocations have much further to run from their significantly underweight levels.