There are now, for the first time, more electric car charging points in the UK than there are petrol stations as growing adoption of electric vehicles (EVs) has driven a flurry of installations.

This is according to research by Nissan using data from Zap-Map, which has found that there are now 9,300 electric car charging points in the UK, while there are now only 8,400 petrol stations.

Of these, 1,600 support rapid charging functionality, allowing standard EV batteries to be charged to 80% in less than an hour.

The crossover point, which comes just months before the centenary of the first petrol station in the UK, installed in 1919, has occurred more quickly than previously anticipated. In 2016 Nissan predicted it would occur in August 2020. 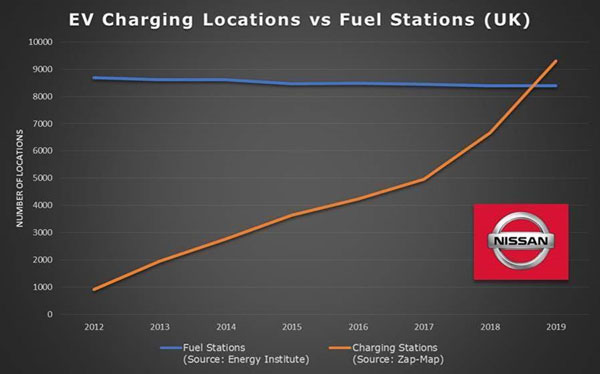 Nissan also reports that the number of electric car charging points totalled just a “a few hundred” in 2011, when its electric car, the Nissan LEAF, first went on sale.

Ensuring there are enough electric car charging points to use the technology without fear of running out of battery mid-trip is has been vital to getting more people to switch to electric.

“These latest figures show that the EV charging infrastructure is evolving at pace and becoming even more accessible, wherever you are,” said Fiona Howarth, CEO of Octopus Electric Vehicles.

“Range anxiety is becoming a thing of the past – greater range capability coupled with the ability to charge at home overnight when electricity prices are at their cheapest means that actually charging on the move is only needed for a long-journey top up.”

In some areas of the UK, there are strong signs of the EV takeover. London in particular has seen rising support for EVs, while petrol becomes increasingly scarce.

While Transport for London installed over 1,000 charging points in the nation’s capital in the last year alone, central London now has half as many petrol stations per car than the Scottish Highlands.

This has been exacerbated by the city’s congestion charge zone, in which there are now just four petrol stations. The introduction of the more exhaustive Ultra-Low Emission Zone (ULEZ) in April of this year has also furthered the switch.

Across the entire country, EV use is growing, with battery electric vehicles seeing a 158.1% rise in demand in 2019 compared to 2018.

“Many consumers are saying their next car will be electric. That means the industry needs to ensure their desires are met with the both the car – how far it can go, what technologies it has – and how it interacts with the world around it – where they can charge and how convenient that is for them,” said Kalyana Sivagnanam, managing director, Nissan Motor.

“We’ve moved beyond the early concerns of range anxiety with EVs now exceeding the vast majority of customer’s daily driving needs. The next challenge is for charging infrastructure to keep pace with the number of EVs on the road, and that the experience of recharging is as enjoyable and effortless as that of all-electric driving.”

On the road to net-zero emissions

This latest achievement is also a key step towards achieving the UK’s wider goal of net-zero emissions by 2050.

“With charging points now outnumbering petrol stations in the UK, we are powering forward on the road to net zero emissions by 2050, a spokesman for the UK Government’s Department for Business, Energy and Industrial Strategy told Verdict.

“This is happening alongside significant investment we’re already making to support the development of the latest vehicle battery technologies and establishing and strengthening low-carbon supply chains for the long term.”