Endometriosis is the second most common gynaecological condition in the UK affecting women between the ages of 25 and 40, however diagnosis and treatment for the disease remains difficult.

Last week, to coincide with Endometriosis Awareness Week (6 – 12 March), researchers from Birmingham City University published a study calling for greater research into the condition and the treatments available to patients.

However, hopes are high that some improvements are on the way with the prospect of non-invasive diagnostic methods and a new drug elagolix, which will be on US and European pharmacy shelves by 2018.

…an oral formulation [elagolix] will be a welcome addition to the field because it provides doctors with increased control over dosing and allows for the immediate cessation of therapy, if necessary.” according to GlobalData analyst Edit Kovalcsik. 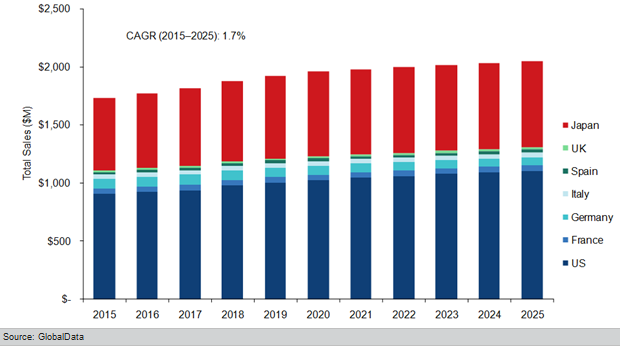 Endometiosis is diagnosed when cells that would normally line the womb, known as endometrial tissue, are found elsewhere in the body — they also grow, break down and bleed.

Women who suffer with the condition can experience painful periods, tiredness, bowel and bladder problems, and in some severe cases it can even lead to infertility. It is the second most common gynaecological condition in the UK, affecting 1.6m women.

The only way to diagnose endometriosis is a gynaecological laparoscopy under general anaesthetic. During this procedure, a viewing tube with a camera and light on the end, called a laparoscope, is fed into the abdominal area.

Currently, there is no way of preventing endometriosis — there are just some ways to manage the symptoms.

“Endometriosis has long been a neglected area of research and funding.  We know that the average waiting time for women to receive a diagnosis is seven years, which is unacceptable.  Our pilot study shows that even once women receive a diagnosis, for some their struggle with managing their symptoms has only begun,” she said in a statement.

One of the many female participants who took part in the study explained how it feels to manage the debilitating condition.

They started me on Depo-Provera [contraception injection], and that made it really, really bad… Then they put the coil in me and that, for a year and a half, was agonisingly painful. And they stopped that, and then they put me back on Depo-Provera actually.

And then my symptoms got worse again, and then I was like, ‘I can’t do this.’ So then they put me on the pill. They tried that for six, seven months, and it didn’t do anything. Then they put me back on the coil for a month!”

Emma Cox is the chief executive of Endometriosis UK, the leading UK charity dedicated to providing information and support to those with the condition.

She agrees that it is about time the condition gets the attention it deserves.

“Endometriosis is a chronic and potentially debilitating condition that causes painful, irregular or heavy periods and may also lead to infertility, fatigue and bowel and bladder problems. Despite affecting 10 percent of women of reproductive age, 176m women worldwide, we still don’t know what causes it and there is no cure,” she told Verdict.

“More research is needed into all aspects of the disease – why it occurs, how best to treat it, how it can be managed. And it’s vital we improve diagnosis – it takes a shocking 7.5 years on average to diagnose in the UK, and surgery is needed to give a definitive diagnosis. All these require research, urgently. We also need to raise awareness with both the public and doctors so women are listened to and believed, not fobbed off and their symptoms not believed,” she added.