The first round of France’s presidential election showed a great divide between voters.

Heightened political uncertainty is forecast to endure until at least the National Assembly elections (scheduled to take place on 11 and 18 June), meaning high net worth individuals (HNWIs) will favour risk-free investment strategies.

For the first time in since the Fifth Republic was established in 1958 neither the Socialist Party nor the moderate-right Republicans scored enough votes to make it to the second round of the French presidential election.

Political analysts argue that the country is characterised by increasing polarisation.

On one side, there is a strong push towards extremist positions, embodied by the National Front’s Marine Le Pen, who envisages a return to the franc and an exit from the EU.

On the other side, Emmanuel Macron wants to relaunch France into globalisation and the European Union through moderate reforms.

Markets reacted positively to Macron’s narrow first round victory: the euro recorded its best performance in five months, the CAC 40 Index posted its best results since 2015, and similar improvements were registered across all European markets.

Macron, the candidate of stability, is seen as the favourite in the run-up to the second round this Sunday, 7 May, as defeated candidates from the traditional right and left parties have encouraged their voters to shun Le Pen.

However, this is not enough to determine Macron’s victory and end the uncertainty.

In fact, the future president will have to secure a majority in the National Assembly elections to be held in June 2017, otherwise the influence of the president will be significantly curbed, as executive powers will be in the hands of the prime minister.

Wealth managers will have to be cautious in both the months leading up to the National Assembly elections and the aftermath, as much will also depend on the national security policy of the future president.

Recurring terrorist attacks – and any subsequent security enforcement – could damage major economic sectors such as tourism and restaurants.

Advisers targeting affluent French investors should lead with low-risk investments such as property, as the sector proves to be only marginally influenced by political decisions, and key markets such as Paris and Cote d’Azur showed positive growth in 2016. 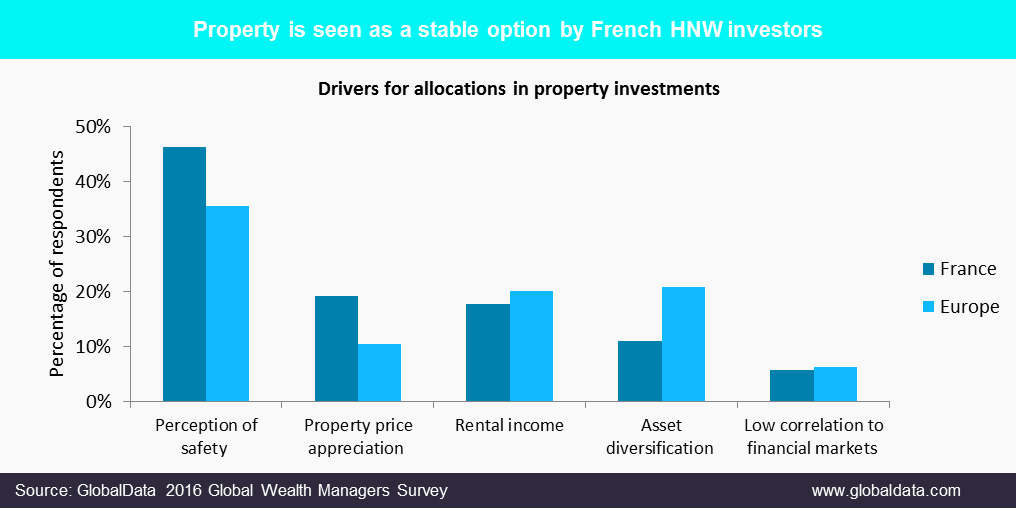 GlobalData research shows investment into property are driven mostly by perceptions of safety, which is not likely to change regardless of who wins the presidential election.

Even with Macaron firmly in control of the Elysee, the reforms he seeks are likely to be contentious and divisive, resulting in further political upheaval.

The sunny beaches of Cote d’Azur have been the favoured second home of HNW individuals for centuries, and Paris is likely to increase its economic influence in Europe after the Brexit negotiations are concluded.

Wealth managers would do well to offer investments in such safe havens over the next year if they want to attract uncertain French HNW investors.