Germany’s trade surplus hit a new record last year and is likely to worsen tensions between Washington and Berlin.

Despite a drop in exports narrowing the monthly measure for Europe’s largest economy in December Germany’s trade surplus for 2016 as a whole rose to a new record of €252.9bn euros ($270.05bn). 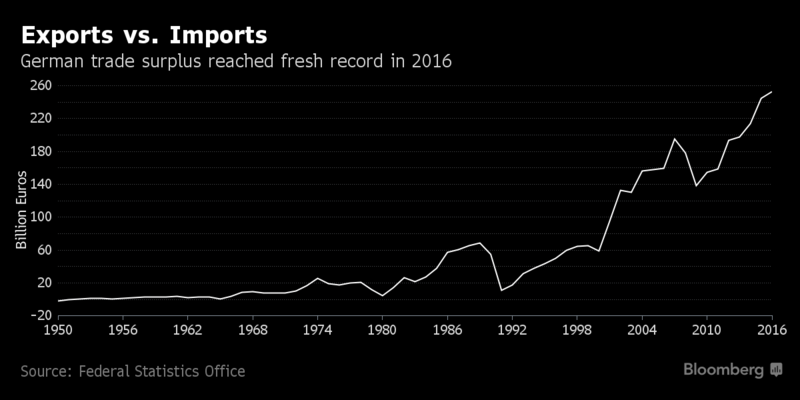 That beat the previous high of €244.3bn set in 2015, according to data from Germany’s Federal Statistics Office.

The US is Germany’s largest export partner, followed by France and the UK.

Why is this bad for US-Germany relations?

Last week, US president Donald Trump’s top trade adviser said Germany was using a “grossly undervalued” euro to gain advantage over the US and its European partners.

Peter Navarro, the head of the White House National Trade Council, told the Financial Times that Germany is gaining an unfair advantage with a weak currency.

“The fact that the German economy is exporting much more than it imports is a source of concern and no reason to be proud” because weak imports are the result of a lack of investment, Marcel Fratzscher, head of the DIW economic institute in Berlin, said. “The record surplus will continue to fuel conflict with the US and within the European Union.”

“European neighbors would benefit from stronger investment in Germany,” he added.

“Germany, however, would profit first and foremost, as the investment gap and the resulting excessive trade surpluses are detrimental to the domestic economy.”