With 403 stores spanning across 49 countries, IKEA truly is a global phenomenon. The Swedish furniture retailer’s domination of the reasonably priced, flat-pack market has further expanded today with the opening of its first ever store in India.

The 13 acre store located in the southern city of Hyderabad, a major centre for the technology industry, today opened its yellow and blue doors to a queue of 200 shoppers.

The IKEA Group is the first major single brand retailer to get foreign direct investment (FDI) approval. The store is part of the company’s $1.5bn investment in India, where IKEA has plans to open outlets in Mumbai, Bengaluru and New Delhi, with 25 stores scheduled to open before 2025.

With a population of 1.25 billion that spends around $30bn a year on household items, and a growing middle class, expanding into the Indian market is an obvious choice for IKEA. However, CEO of IKEA India Juvencio Maeztu has said that the company is not looking to simply ‘copy and paste’ its existing range, but instead adapt its product line-up to suit local tastes.

The company reportedly visited over 1000 homes across India to get an insight into what sorts or products families used and needed.

Here’s how IKEA hopes to bring skandi-style to India.

In a bid to keep prices low and get around high import duties, IKEA will source some of its materials from local suppliers. This is partly due to the fact that the country requires foreign-owned, single-brand retailers to use Indian-made goods for at least 30% of the value of their goods.

Furniture such as the popular Ektorp sofa will be made from local materials, which India already supplies to IKEA stores globally.

“IKEA is committed to grow the Indian manufacturing landscape to maximize local sourcing from India and exploring sustainable indigenous materials such as bamboo, jute and wood that will add to the global IKEA product range. One of its most important commitment is to engage in community led initiatives that will mirror its sustainability agenda as an integral part of business, especially in India.”

According to the New York Times, existing products have also been altered to suit local customs, such as making furniture that could be easily lifted off the ground as many people frequently clean their floors with water, and the omission of untreated pine which is not suitable for the warmer climate.

As do-it-yourself furniture is not commonplace in the country, IKEA India has partnered with UrbanClap, an app similar to TaskRabbit that connects users with local tradespeople who will assemble it for them. 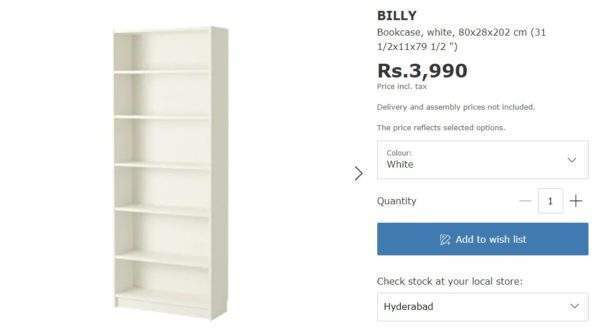 The annual median per capita income in India stands at around $616, meaning that the company has had to adapt prices to suit the country’s income levels. It has introduced 1000 products costing under 200 rupees (less than £2.50), cheaper than in most countries, and hundreds costing less than 100 rupees.

The company’s best-selling Billy bookcase costs 20% less in IKEA India than in the US, and the Ektorp sofa is 30% cheaper.

According to India Today, the 1000-seater restaurant is not just the largest food hall of any IKEA store, but could also be India’s largest restaurant too. As well as traditional Swedish fare, the restaurant will offer regional cuisine such as biryani and samosas.

Swedish meatballs, an integral part of a trip to IKEA for many shoppers, have been adapted and will be made from chicken or a meat substitute rather than the usual beef or pork for religious reasons.

However, whether IKEA will manage to crack the market remains to be seen. Satish Meena of Forrester Research told The Guardian that the changeable, diverse nature of the market means that this may take time:

“No two states or cities have the same furniture demand and behaviour; lifestyle and culture vary from one region to another. Hence, IKEA will have to address space, pricing and design issues and pick products accordingly.”