League of Legends is now trying its luck in the world of music, having already made its mark on sports.

Video game developer Riot Games, the company behind the hugely popular League of Legends online multiplayer game, has announced a live concert to get fans in the mood ahead of the League of Legends World Championship final.

The game’s top talents are currently in Beijing, China, competing in the annual tournament. 16 teams of gamers are battling to win a prize pool of more than $2.1m.

The likes of Misfits Gaming and Samsung Galaxy have already provided fans with plenty of entertainment. However, Riot hope to take the event to the next level with a symphony of scores and anthems that LoL fans will know all too well.

League of Legends Live: A Concert Experience will take place on November 3, on the eve of the tournament’s finale. Held at the Beijing National Aquatics Center, the concert will get underway at 12:30pm London time.

Who will be performing at League of Legends Live?

The concert will feature a number of performers, from recording artists to community creators.

The headliners include Norwegian music producer Alan Walker, known for his track Faded, which features in the game. Metal band Pentakill will also be performing, as too will DJ duo Mako.

There will also be performances from:

Riot has promised a number of fan favourites, which will be performed throughout the 90 minute show. Artists will perform LoL hits such as Get Jinxed, Star Guardian, The Curse of the Sad Mummy and more. 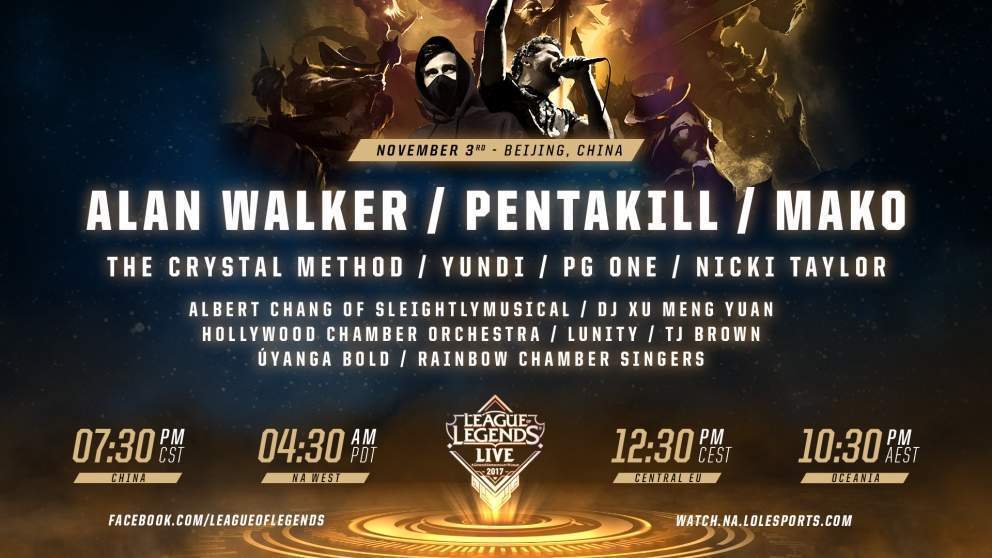 Anticipating a lack of international demand, Riot has confirmed that tickets will only be sold in China. We believe that tickets will be sold on the door, with only a limited number of seats available. However, the developers have been somewhat quiet on specific details. It’s probably best to hold off flying in until more is announced.

Luckily for those of you based outside of China, the entire concert will be streamed via the LoL Esports website and the League of Legends Facebook page.

Topics in this article: Stream It