Matt Hancock, the UK Secretary of State for Health and Social Care, has downplayed the role of technology in ongoing contact tracing efforts to combat the coronavirus.

Speaking at Virtual CogX, an online technology conference, this morning, Hancock described the ongoing Isle of Wight trials of the contact tracing app as “very successful”, but argued that the use of people was more important that the deployment of technology.

“One of the main things we’ve learned is what really matters is the people, and the technology is a facilitator for people to be able to do things better,” Hancock said.

“Because isolation after you’ve been contacted by a contact tracer is the number one thing to do, that is better done with human contact, and hence the contact tracing system is now up and running and doing well.” 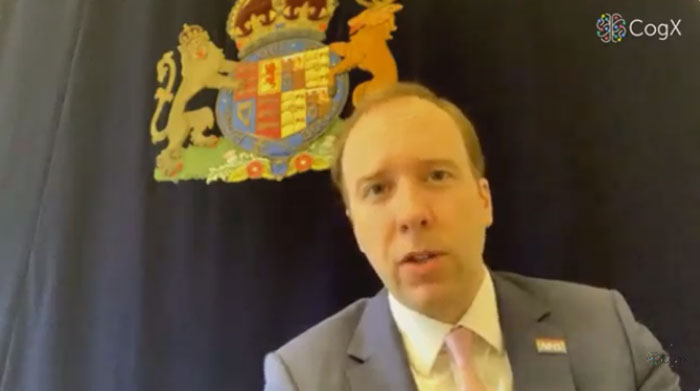 He characterised the app as an added benefit rather than a core part of the government’s coronavirus efforts, in an apparent attempt to downplay its importance.

“The app is the cherry on the cake; it enables you to find other contacts you wouldn’t be able to disclose even if you wanted to because you don’t know about them,” he said.

He also dodged attempts to pin him down to a launch date for the app from talk moderator Harry de Quetteville, saying only that “the app is progressing”, and “we’ll launch it when the time is right”.

Despite a number of concerns surrounding the growing presence of big tech in the NHS, Hancock was full of praise for technology companies that have partnered with the UK healthcare system during the pandemic.

“What I care about is getting results. When companies will come and help within a pandemic then that is great. The honest truth is there is no way we would have been able to cope with this pandemic without the support of tech companies,” he said.

“It’s a true public-private effort, and lots of people came to the table for public benefit, pro bono, in order to make happen what we needed to make happen.”

He dismissed the idea that the NHS should wholly be the domain of the public sector, arguing that private companies were a vital part of the system.

“I think this whole debate in the past that the NHS has to be only public sector and you can’t have private companies helping – I think it’s for the birds. You have to have teamwork, because that is the only way to deliver public healthcare that is free at the point-of-use.”

Read more: Contact tracing app will be exploited for cyberattacks, half of UK citizens fear