From Roswell to Guantanamo Bay, no matter where you are in the word, the famous Golden Arches often aren’t far away. However, McDonald’s Africa is yet to be fully established.

Worldwide, there are 36,899 McDonald’s, stretching across 120 countries. When you map out where McDonald’s aren’t, however, it shows one continent in particular is lacking the Big Mac: Africa.

Countries with no existing McDonald’s outlets are highlighted here in red. 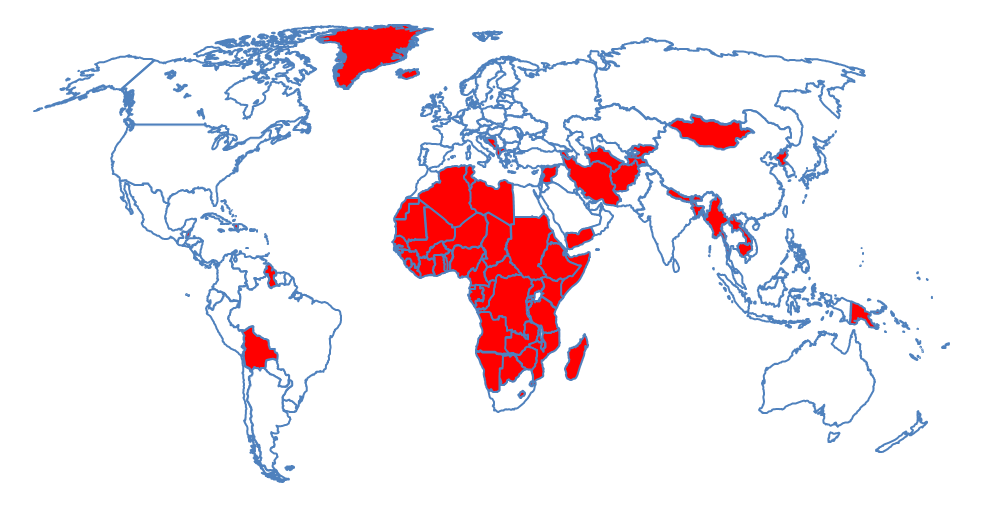 Although Africa is home to over 1.2bn people, McDonald’s is present in just four African countries: Morocco, Egypt, South Africa and Mauritius.

Combined, these markets contain a paltry 387 McDonald’s. To give a better perspective, there are 393 McDonald’s outlets in Mexico alone.

As core Western markets continue to stagnate, fast food companies should turn their attention to the largely unsaturated African markets. And where better than the economic powerhouse, Nigeria.

In 2015, McDonald’s South Africa CEO, Greg Solomon, claimed that “it was not about if, but when” the brand would be entering Nigeria. However, news on the subject has since all but dried up.

Over half of global population growth will occur in Africa between now and 2050, according to a recent PwC report with Nigeria’s population alone expected to reach around 400m in 2050, which would make it the third most populous nation in the world.

Nigeria’s GDP per capita has risen from $379.12 at the turn of the Millennium, to $2,177.99 in 2016, while 46 percent of people in Nigeria say their disposable incomes are increasing, according to a recent GlobalData survey.

The McDonald’s brand — due to being a US brand — would likely be viewed positively compared to domestic fast food chains. GlobalData research found 48 percent of Nigerian consumers associate the US with high quality food and drink, higher than both Europe (34 percent) and Nigeria itself (30 percent).